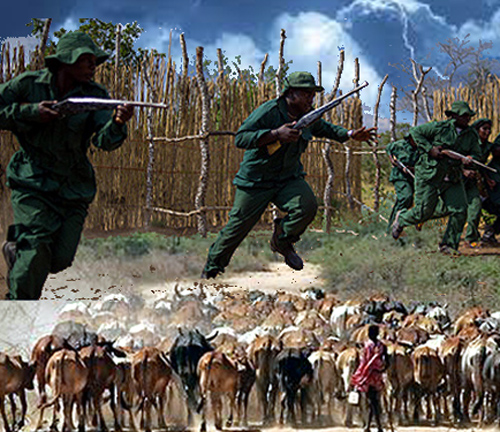 Not just in Dallas or Cleveland, “Excessive Force” is a top news story in Tanzania where four Lake Manyara park rangers were arrested last week.

The rangers got into a confrontation with herders bringing cattle into the park, which is illegal.

The rangers tried to impound the cattle for trespassing on national park lands, then claimed that up to 30 villagers attacked them with traditional weapons provoking them to fire modern weapons in self-defense.

Several villagers were wounded, and one 34-year old man was killed.

Only the Arusha police commissioner issued any statement and that simply that four of the rangers were arrested for using excessive force. Tanzania national park authorities issued no comments.

East African media, though, unlike here at home was reluctant to publish the story. One of Tanzania’s smaller, independent newspapers published it only on its on-line edition, which when I checked this morning had received less than 400 views.

The reporter discovering the story, Hazla Quire, resorted to filing his news through friends on Facebook: John Mrosso: June 6 posting.

By the end of last week only the Chinese news agency, Xinhua, had picked up the story and distributed it in East Africa but notably not in China.

Incursions by local herders into national park lands are increasing throughout Tanzania as the competition for good grazing increases. It’s particularly stressful during times of drought.

I was in this remote part of Lake Manyara National Park in April, and we saw several small herds of cattle in the deep forests just after the park gate about 10k west of &Beyond’s Tree Lodge.

The private lands leading up to the gate are relatively prosperous by village standards in East Africa. Densely populated the farms here produce several types of grain and a lot of rice irrigated by waters related to Lake Manyara.

But there had been an intense although short drought in February. I think the rice was doing OK but the grains were stunted. Heavy rains had just begun and several farmers were trying to plant all over again, their normally planted first-of-the-year crops lost.

Herders were suffering more, because it takes only a few weeks of drought before all available private grassland is grazed out. As this happens more and more with climate change, grassland rejuvenation is trumped by the erosion that occurs with the first rain.

East African park rangers are among the better educated, better paid security forces in the country. Consider that regular police often miss paycheck after paycheck. This isn’t the case with park rangers who are heavily subsidized by foreign NGOs.

They are also well armed and otherwise well equipped and well trained. Like police here at home, their actions are being captured on mobile devices and provoke the debate over “excessive force.”

This is not a debate about the issues of the confrontations. I, for one, believe that much of Africa’s wondrous wilderness is protected for us rich foreigners with very little benefit to the local population, and that’s a massively important debate.

As is why Baltimore’s waterfront has received so much money for development but little more than one CVS store has been built in west Baltimore.

But those are not the issues at hand: the police have been given a job however morally compromised: it’s their sworn vocation.

I think they used far too much force in many of the incidents surfacing recently in America. But what about in Tanzania last week in Manyara?

In a less developed society where arrest is often tantamount to conviction, one would naturally surmise that the four rangers were guilty of the use of excessive force, but not necessarily.

Arresting the rangers was likely the only way to defuse the volatile situation. I think it highly unlikely that anything further will come of this.

What is now more unclear than ever is whether more cattle will intrude the remote western forests of Lake Manyara.