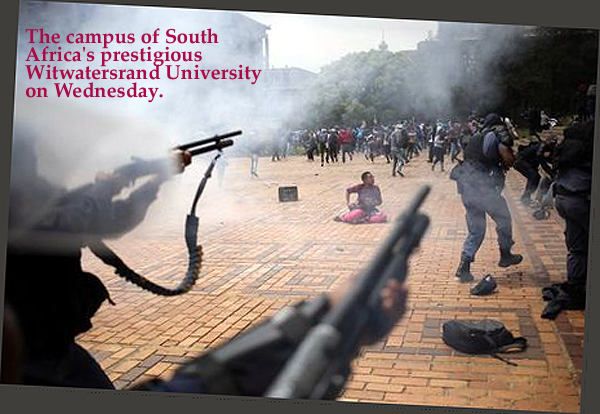 South Africa’s respected university system is in chaos. Most universities are closed because of violent protests.

While the ostensible issue is the cost of tuition and fees, I think there’s something much deeper, reflecting a very troubled South Africa.

The problem began last year when the government announced a 10% increase in tuition. This was steep, students immediately protested then almost as strikingly the government relented. President Zuma announced unilaterally in a somewhat ad hoc press conference that fee increases would be rescinded.

Some argue the protests started even before that at Stellenbosch University over what courses should be taught in which languages.

The government backed down on that one, too, but no government retraction seemed to work, no matter the issue. Protests continued and expanded into all sorts of issues, including subcontracting university services to conglomerate companies, and wages for university workers.

Before long #FeesMustFall grew to eliminating all fees.

Most universities during the last year were able to open for substantial periods of time, and many – particularly in South Africa’s Bible Belt north of Durban – for most of the year. But things turned very nasty, again, several weeks ago.

The protest issues now include police brutality, student access and university governance. Despite numerous attempts by administration, government and even alumnito cool things down, they continue to heat up.

This is not happening in a vacuum of academia. The South African government has been so immersed in scandal after scandal, that the actual violence from students across the country often doesn’t even make it onto the front page of a newspaper.

The current president and a quickly changing ministerial cabinet faces indictments for various forms of corruption, malfeasance for not following legislative rules and increasing court challenges to operational regulations.

South Africa’s “Public Protector” is very much like our Attorney General although with more powers to initiate prosecution. The current prosecutor, much revered Thulisile Madonsela, steps down Friday after 7 years in office. The country expects her “state capture reports” to be earth-shaking. When she tried to hand over her these sealed investigations to the Speaker of Parliament for safe keeping, he refused to accept them.

Instead, President Zuma went ballistic and tried to suppress the schedule which will reveal them to the public shortly, going so far as to claim that Ms. Madonsela was “threatening” him.

The reports purportedly contain allegations of intense corruption between the highest levels of government, including President Jacob Zuma, and mafia-like business people including the much despised Gupta Brothers, who have been investigated by Ms. Madonsela for nearly two years.

But Ms. Madonsela’s “reports” are expected to stretch well beyond a single mafia/government scandal. Many of the current president’s actions, including setting up security apparatuses separate from those mandated by the constitution or Parliament, are probably in her sights.

I think the student protests are simply pimples popping, the youth’s infected acme of the state. This year’s regional elections provided a clear indication that the country as a whole is fed up, but no one, and no institution seems to get a sufficient rein on the cause of all this miscreance, President Zuma himself.

Meanwhile it’s neither a cliche or understatement to point out that the country’s future, its educated youth, is being beaten to death.