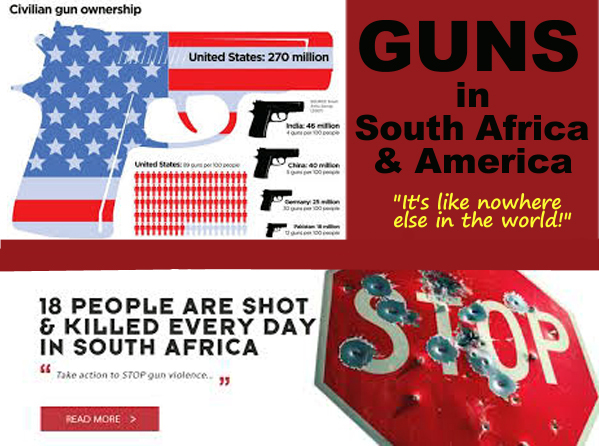 There’s only one of 52 countries in Africa where individual citizen gun violence reaches the level of America’s : South Africa.

Citizens – huge percentages – in both America and South Africa believe banning at least some guns will reduce this horror. Guess what? South Africa has already passed some of the toughest gun laws in the world but gun violence is still increasing. Does this mean laws against gun ownership don’t work? There’s a pretty terrifying answer.

Like many progressives in America I’m quick to blame the NRA for derailing every attempt we make to suppress individual gun violence. Is there anything so heinous as – exactly a year ago yesterday – the first piece of legislation that Trump signed which removed all restrictions on gun sales to the mentally ill? This was an NRA crafted, written, pushed piece of legislation. Trump probably thought he was signing chits for cheeseburgers.

(PS. The single sponsor of that bill was Sen. Charles Grassley R-IA. Yesterday Grassley said on camera that the mentally ill should be restricted from buying guns.)

So, yes absolutely, the NRA has been very successful keeping American legislators from passing any restrictions on guns.

South Africa, in contrast, has some of the toughest gun laws in the world. “The Firearms Control Act of 2000” not only restricted gun sales but required personal interviews to establish competency for owning a gun. There was also an amnesty program which allowed owners without licenses to surrender their guns without consequences and greater taxes on guns and ammunition.

Virtually every anti-gun advocacy group praised South Africa. The statistics were irrefutable: Gun ownership, distribution and most importantly, violence, decreased BY HALF in the first decade of this century.

Almost all the gains achieved in the first decade of the 2000s started to reverse in 2012, and this trend has accelerated so that right now gun-related crime and violence in South Africa is almost as bad as it was before all those laws were passed.

None of the laws has been rescinded. None of the regulations associated with them have been rolled back.

What changed in South Africa wasn’t the laws, but the government.

The government of Jacob Zuma which was finally ousted several days ago was one of the most corrupt imaginable. It was a perfect Trumpism government. Laws did not matter, and this was understood down the line even to those who may not have initially supported the government.

Last year one of Cape Town’s top cops, Chris Prinsloo, pleaded guilty to masterminding a massive criminal operation that included selling thousands of illegal guns to criminals that the government had confiscated from other criminals.

It was a rare victory during South Africa’s just ended dark era of politics. But instead of congratulating the prosecutors and good police who accomplished ‘Operation Combat’, the head of the South African police (slightly comparable to one of our FBI division heads) did everything in his power to sideline and demote those responsible for the successful operation.

“That two of Operation Combat’s leaders have been sidelined speaks volumes. Honest, hard working police officers deserve the support and praise of their superiors… That [this] has happened is scandalous,” wrote one of South Africa’s most beloved judges and authors, Marianne Thamm.

What are the “volumes” being spoken?

Laws is only half the solution. Enforcing those laws is the other half, and the grave mistake of anti-gun activists is to presume the simple passage of a law ends the debate. Real efforts have to be made to make sure any such laws will be enforced.

Zuma himself flaunted many kinds of laws. He protected many close to him from all sorts of legal ramifications, but the everyday laws regarding food safety and taxes and civil crimes and trading stocks and child guardianship etc. etc. – they all continued as usual.

But not gun laws. From the top-down the corrupt administration simply didn’t enforce or support enforcing the gun laws, because criminal violence is the most effective tool against peace and stability.

There is a culture in both America and South Africa that foments violence unlike many other parts of the world. Today in America and two days ago in South Africa the politicians of both countries fed on that violence – they depended on it for their survival.

Guns are a great assist to them. Controlling guns is a great impediment to them. But law is only the first step in achieving that control.