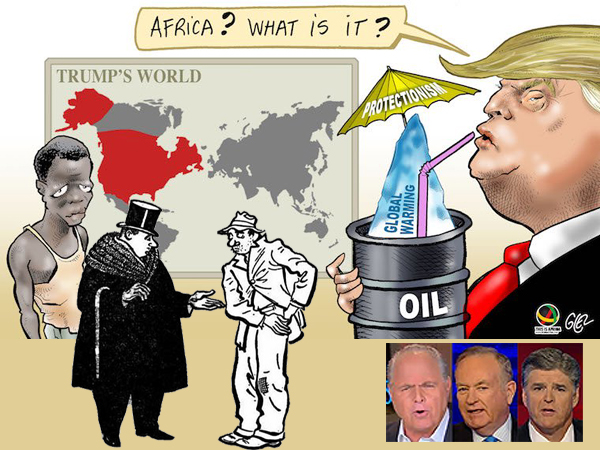 Anything happen this year?

Sorry. Perhaps a poor attempt for just a bit of relief. End-of-the-year analyses are coming out. I sit in a little world of Africa news and things, but I expect all the little worlds feel the same thing I do: the universe is tanking. Now if you’re sitting at a big desk on Wall Street you see it otherwise, because the rich world is doing just fine. But time’s have changed. The world is starting to move as one, and how Africa or Taipei or the Ukraine or Latvia goes, so eventually does the whole world, even eventually the rich.

This year saw the biggest transfer of wealth from the poor to the rich in the history of mankind, and with America’s new tax cut, that will accelerate even more.

It would be actually better if the poor folk were happy folk. But they aren’t. More than 100 million people pushed their families below the poverty line this year because they were bankrupt with health care. A larger number gave up.

“It is completely unacceptable that half the world still lacks coverage for the most essential health care services,” said WHO’s Director-General yesterday in Tokyo.

We used to look at these from afar and tisk. We should now realize that what we see is a harbinger of what will happen to us.

The Director General was not speaking just about Kenyans. He was referring as much to half the people in America’s Appalachia as to the refugees in Sri Lanka. Now whether or not you believe everyone should have free access to basic health care services, at least acknowledge the fact that half the people in Appalachia are today likely just as sickly as the peasants in Zambia.

The world’s connected. Not just its victories, but its failures as well.

So while Wall Street is doing well right now, and probably next year, the emerging world is tanking and it will absolutely eventually draw down the rest of us.

The practices we promote in our own societies – like reducing health care or transferring more wealth to the rich – have their most immediate consequences in the developing world.

The developing world can’t make it out of its hole just by making its rich, richer. There are too many still poor. The rich in South Africa have tried and are failing to convince the greater public with television ads that lower taxes are a good idea.

So instead the country’s rich leaders are indebting the country massively to places like China, just by the way like our Republican leaders are doing here.

Telling this story loud and clear is the yet mostly independent journalism of the world. And the rich know that. This year saw a profound attack on journalism all over the world.

According to the Committee to Protect Journalists, the main reason for this is because “the U.S. and other Western powers failed to pressure the world’s worst jailers–Turkey, China, and Egypt–into improving the bleak climate for press freedom.”

Obviously, no surprise. The rich do not want their immorality revealed.

The most peculiar thing about all this is in America, though. About a third of America has been critically fooled. I’m beginning to doubt Abraham Lincoln’s old adage about fooling the public.

Fox News is filled with un- and disreality. But Fox News has a loyal, large and powerful viewership. Fox News represents the Looking Glass world in which power is mastered by the rich.

It’s hard to reach the ridiculously general conclusion that a super rich person is a liar. And, of course, it just statistically couldn’t be universal.

But it’s vastly, mostly true. And it’s not an indictment of that person’s morality any less than the system that allowed that person to lie in the first place. That “system” is proudly bought to you, and supported whole-heartedly, by the viewers of Fox News.

So… anything happen this year?