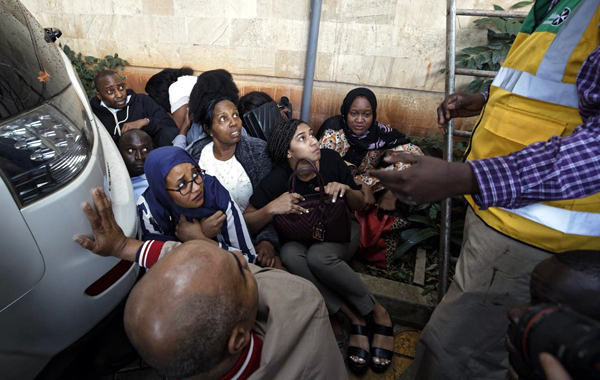 It you were a foreigner heading to Orlando last February, or Nashville last April, or Sante Fe last May or Pittsburgh in October or any of the other 14 major U.S. shootings last year, you’d probably feel right now just like an American heading to Nairobi.

Yesterday around 3 pm in an area very close to the horrible Westgate Mall massacre of 2013, four gunmen jumped out of a car in front of the dusitD2 luxury hotel and shot their way through security. One then blew himself up in the lobby near the restaurant. The other three shot their way through the rest of the hotel.

More than 700 people work in offices in the same building as the hotel and approximately 150 residents, staff and customers were in the hotel and its café and restaurant at the time of the shooting. Military and police were on the scene within ten minutes, but the last shooter wasn’t killed until 3 a.m.

According to the government all four terrorists were shot by police.

The Horn of Africa terrorist group, al-Shabaab claimed responsibility. In November, 2017, I warned that Trump military negligences in Somalia were jeopardizing the stability there and the war against al-Shabaab. Last June I wrote that al-Shabaab was growing stronger as America continued its withdrawal.

Yesterday a Kenyan court remanded three suspects to trial over the Westgate Mall massacre of 2013. Terrorist groups often attack on anniversaries or other dates with specific meanings.

The Trenton shooting in June also involved more than a single gunmen, and the Sante Fe shooting also involved explosives. Seven of the 18 domestic terrorists in the U.S. last year quickly killed themselves after killing others; more tried and some were killed by police.

American terrorists rely more on firearms than explosives because firearms are so much easier to obtain in America than the components of a small bomb. It’s just the reverse in Kenya and in most of the rest of the world, where bomb components are easy to obtain but where firearms are heavily restricted.

Does it matter that the Kenyan shooters cherish a crazy belief that they will be martyred after killing others, or that terrorists’ families’ routinely get paid large stipends for their kids’ suicides? Is this any crazier than beliefs that Jews are devils or that a wave of drug dealers and warlords is crashing our border?

No, of course not. The whole of human society has degraded. There were always crazies and murdering crazies at that, but never the rationalization given their acts today or the tacit if often actual support found for such death and destruction on social media.

Revolution is one thing. Individual killing without a mass uprising is altogether different. It would be terrifying if the march on Charlotte had ended up staging a battle with police for control of the square, but I’d be able to deal with that better. I’d inveigh against it, argue our laws are too strict or too light, connive retaliations and social consensus for a counterattack.

But a man-cave of juiced up crazies out to mow down innocents is such evil random that it is, in fact, the more terrible of the two.

There are no places in the world, today, where terrorists or juiced-up crazies aren’t lurking in the shadows. Not Kenya, not Nashville, not Thailand, not Orlando, not Paris. It’s our times. If you play the odds, then for sure you won’t take a vacation in the United States.

Social media and digital wizardry glorifies murder, barbarism and random hurt. For years I’ve dreaded the Saturday movie as little more than cars flying off cliffs, guns that never need reloading and the greatest testimony to our skills as the supreme species, the ultimate weapon of destruction.

Fascination with the dark side is becoming worship. It doesn’t help, of course, that the less privileged fall further behind. It’s possible to address the cultural demise and economic unfairness separately, but as societies we seem unable to address either.

Kenya is dear to my heart. It’s actually safer to visit than almost any place in the U.S., especially today when we are ripping ourselves apart unable to even govern ourselves rationally.