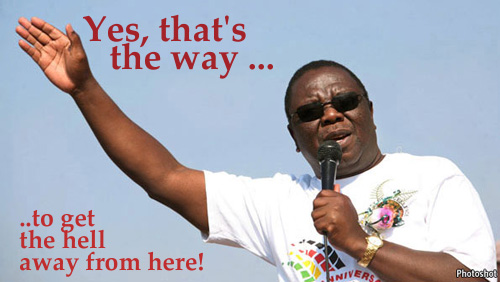 Contrary to very strange suggestions I’m reading in the travel press, it’s still too dangerous to safari in Zimbabwe. Tourists are being murdered. And not by political thugs, either.

Zimbabwe’s economy is recovering from a hole some of us feared would spew forth the lava from the center of the earth. And the opposition democrat and power-sharing Morgan Tsvangirai is getting more attention as he jaunts around the world. And for these two reasons Zimbabwe watchers say things are getting better, in particular, safer and more welcoming for tourists.

They are DEAD wrong.

Zimbabwe’s modern story is one of the most remarkable in the world. In a few short months the dictator Robert Mugabe will tie Africa’s previously second-longest serving African dictator, Mobuto Sese Seko, who was in power for 32 years.

(As far as I know there will be no colorful fetes.)

Number One is Omar Bongo, president of Gabon, who held control for 42 years, a record few believe aging Mugabe can reach alive.

In all three cases, the leader ruined the country while amassing unimaginable personal wealth.

In Zimbabwe, Zimbabweans are directly responsible for the bad situation in Zimbabwe.

And that’s probably why nothing is going to happen to make things better, even after Mugabe dies.

On the political front, Tsvangirai is a huge disappointment. It seems clear to me that this masochistic egotist had little more than a Mercedes Benz in mind when he let himself be beaten to a pulp numerous times before being invited to join the government.

Like a piece of tough meat, the Mugabe regime has tenderized him. He’s useless. Useless, that is, to the people of Zimbabwe. He’s become prime rib for the regime, who hauls him out on a plate each time they’re criticized from abroad.

So the country has continued to go down the tube.

Yes, there may be less street violence, a result of Tsvangirai’s unending marination. The economy like virtually every economy in the developing world is on the up, but nowhere near at the pace of its neighbors or near a teeny weeny fraction of its potential.

So fuel for vehicles needed to transfer tourists from place to place is still scarce, and new white faces are more often presumed the feared leaving than visitors arriving.

But here’s the worst indicator:

A lot of animals are killing a lot of tourists.

A week ago Saturday five lions brutally killed a tourist near the country’s main national park, Mana Pools. Last month a man was trampled to death by an elephant in Matusadona national park. A veteran conservationist on anti-poaching control in the same place was gored to death by a buffalo a few days earlier.

And even outside the national parks, a resident biking near Kariba was tusked by an elephant.

Animal attacks aren’t unknown, of course, in Africa, but these recent incidents are not normal.

“We appeal to everyone to exercise extreme caution. Animals have become extremely unpredictable,” said Zimbabwe Conservation Task Force head Johnny Rodrigues. Rodrigues explains that uncontrolled hunting – even in the national parks and often by Mugabe regime sportsmen – has “traumatized” the animals.

Every safari traveler needs to exercise caution inside a national park, but unlike Geoff Blythe who was tusked near his home in Kariba, certainly this is not a regular need outside a wilderness.

And the “extreme” caution that Rodrigues advises is simply below the threshold of a vacation’s safety.

So forget about any plans to visit Zimbabwe.