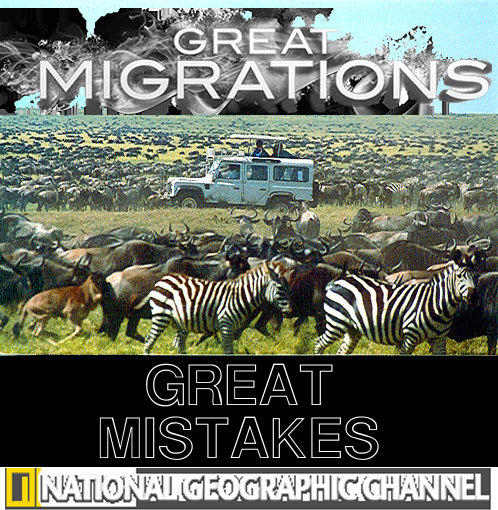 The filming is fantastic! But NatGeo cable shouldn’t have tried to vie with Dancing with the Stars. They’ve really dumbed down what could have been an outstanding work.

I suppose it’s like anything in the media, today. All that’s offered are sound bites, beautiful pictures, and short sentences, all of which reduce the complex into something often indistinguishable from its real self. Complexity is what makes nature so marvelous!

The series documents twelve epic animal groups whose life cycles involve lengthy migrations and then chronicles one of each of the cycles.

In absolutely stunning photography we watch several families of Mali elephants trekking across the great western deserts, see dusk skies suddenly blackened by myriads of bats, follow giant whales on their lengthy journeys through the oceans, as well as watch the wildebeest migration which is so dear to my own heart.

I can’t speak with much authority on much more than the wildebeest migration in East Africa and the zebra migration in Botswana, but I think it’s fair of me to presume that what is so critically missing in the explanations of those two migrations probably has something similar lacking with them all.

NatGeo says, “Starting in May or June, wildebeest walk from the southeast Serengeti plains westwards toward Lake Victoria and turn north into the Maasai Mara, in search of fresh… By November, they’ve exhausted new grazing lands, and return south.”

One of the features of the migration – one of the really exciting aspects to it – is that when it “starts” as NatGeo correctly says in May or June, it’s an explosive start. It’s hardly a walk. It’s a race, a marvelous thing to see. Files of wilde several or more miles long might stampede for 3 or 4 hours without stopping.

It’s also wrong to suggest they all move together. I’ve never known a single year in the 38 since I’ve visited the Serengeti where this is true. The “herd” at most can be defined in three parts, often in six or seven, each part of which moves mostly north, but some east while others west. There is no “one route.”

With regards to the zebra in Botswana, the production suggests they are drawn into the Kalahari’s pans for salt which isn’t plentiful enough in the Okavango where the migration “starts”. This, too, is wrong. The zebra migrate onto the Kalahari plains shortly after the rains have grown grasses that are much more nutritious than they can obtain in the swamp. So it’s here that they calve, so that the herd has a more nutritious food source to grow the babies.

Some may call all this nitpicking. But there’s a much, much more serious flaw in the larger narrative. NatGeo claims (I believe as with all the animal groups discussed) that the wilde are “hard-wired” to move. That’s simply not the case.

The wildebeest migrate when triggered by hunger. The zebra are likely triggered by enzymes similar to our own feelings of “hunger” after eating a high sugar breakfast, feelings likely caused chemically by pregnancy that draw them away from the less nutritious swamp grass to the much richer plains grasses.

If the animals aren’t hungry, they don’t migrate. NatGeo doesn’t deny this, but it claims that getting hungry is inevitable for such a large congregation of wildebeest, for example. Several times in the narrative Alec Baldwin remarks how they’ve eaten themselves out of house and home wherever they stop to graze, and so then must migrate.

That’s wrong. There’s much more land and grass in the Serengeti than wildebeest, zebra and gazelle available to eat it. So long as it rains, there will be enough grass virtually everywhere, and the wildebeest won’t migrate.

I’ve seen it often enough in forty years. Even this year there was an anomalous migration.

The East African reported last month that “A change in the spectacular wildebeest migration schedule in the great Serengeti-Mara ecosystem has caught ecologists offguard.”

That was an exaggeration but it stands as evidence that there is nothing regular about the herbivore migrations. They move when they run out of food, and that happens when it stops raining.

The governing aspect to this great migration is not some hard-wire neuron in the wilde’s head. It’s climate. And that’s a critical component in understanding what is probably true of most of the world’s animal migrations:

There’s more to it than just the animal, itself. The planet is interlaced with life, and what happens to the wildebeest can indeed be traced to the melting glaciers in Alaska. Particularly now with global warming, there is more and more rain especially on the equatorial belt, and this will alter not just the wildebeest’s behavior but likely the behavior of all life along the equator.

Some may argue this is too subtle a distinction, but it really isn’t. Asserting that the migration is innate, “hard-wired” into the life cycle of the wilde robs it of the bit of independence it has as a life form. It begs the question of how much hard wiring we as humans carry around.

I don’t doubt there is hard wiring in all life forms. We normally call it instinct. But instinct removed from environment has no value. I’ve never watched wildebeest migration in a zoo.

There may, indeed, be animal groups NatGeo filmed that migrate to hard-wire responses. Perhaps the monarch’s complexity is so described; perhaps there is something similar with most bird migrations.

But not with wildebeest. And I doubt with any of the larger animals like the elephant seals or whales.

Animals don’t have our level of cognizance to be sure. But let’s not rob them of their own levels of consciousness. They make choices, and they sometimes make the wrong ones. That is one of the reasons for mass migrations: there will likely be more correct choices than incorrect choices, so the herd as a whole continues to survive and validate its natural selection.

Thanks, NatGeo, for some outstanding film. But let’s work a bit harder on avoiding common denominators that dull the polish of the world’s remarkable complexity.