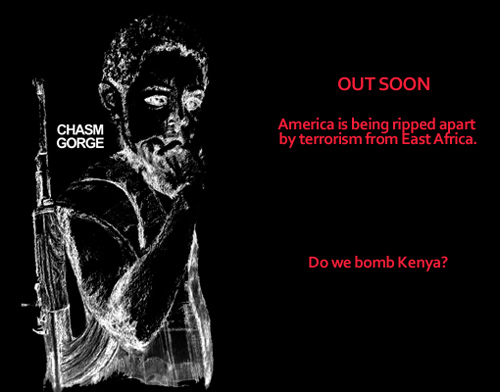 Jim Heck’s new novel, Chasm Gorge, will soon be available for purchase in all formats through sellers like Amazon and book stores across the country.

Watch this space for free excerpts available prior to publication in September.

Ohio congressman Brad Talvich is set to become the next president of the United States. As a former popular NBA player with long experience as a fighting Republican congressman he has everything the party needs to win.

There is only one thing holding him back – the kidnapping of his son by the world’s most notorious terrorist.

Author and experienced safari guide Jim Heck invites readers to experience his debut novel, Chasm Gorge, which tells the thrilling story of a safari guide’s journey through Africa in search of the son of one of the most powerful men in the world.

Len Willy had previously rescued kidnapped teenagers roughly in the same locale that The Congressman’s son is presumed to be. But he is reluctant after an aid calls asking for his help. Unable to say no due to his conscious or his pocketbook, Willy embarks for Africa, where his first task is to find Tali, Africa’s most notorious terrorist, Cassidy’s kidnapper as well Willy’s former driver and guide.

“Terrorism is unstoppable and forever unpredictable,” Heck says. “I hope readers gain an acceptance of terrorism as part of life, today and an understanding that you can’t eradicate with force something that fires in people’s minds.”

In Chasm Gorge, Willy faces one threat after the next. His situation grows murky and more dangerous when the Congressman’s son, Cassidy, demands a ransom for himself even after escape from Tali is secured. Will Willy be able to get Cassidy home before the American government over reacts?

Jim Heck has been a safari guide since the early 1970s. While witnessing firsthand the evolution of terror in Africa, he has been kidnapped, lost in jungles, flipped out of a canoe into crocodile invested waters and been pinned in his tent by an elephant. Heck and his wife, Kathleen Morgan, were among the very few westerners to explore Uganda under Idi Amin.

Jim’s novel, which is already in great demand, presents disturbing truths about terrorism from first-hand experience.

Destined to become a best-seller, stick to this space for more information!