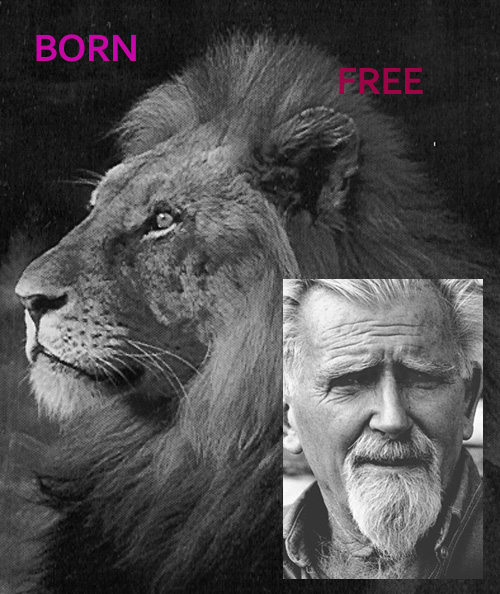 “Born Free” is an African expression that resonates with Americans as none other, and today is the 15th anniversary of the death of the man who coined it, George Adamson.

“Born Free” was the name of the first book written by George and Joy Adamson about their orphaned lions in a part of Kenya that is now Meru and Koru National Parks, east of Mt. Kenya.

Their central story of Elsa, the lioness, has been told, retold, mistold and told differently a thousand times since. It’s headlined movies, wall murals, safari company names and trip titles and even Broadway theater.

The couple Adamson was one of the most gentle conservation teams I’ve ever known. Unlike so many others, they actually shied away from the public. They divorced about ten years before Joy’s murder in 1980, although continued seeing one another often. Time and again you’ll hear the story of a successful conservation couple in Africa whose complicated business growth through the years tangles up and finally ends their marriage.

Yet there is no question that their successes and their fame was entirely mutual. It’s hard to imagine either would have had any notice without the other.

George was British and came to Kenya during the height of the colonial days, starting as a hunter but quickly becoming deeply interested in the wilderness. He was a game warden for many years for both the colonial then independent Kenyan government.

Joy was Czech and as a young and fairly privileged young lady came to Kenya to hunt. She fell in love not only with George but with his new style of conservation.

Joy was the principal author of the book Born Free but is perhaps now better known for her amazing portraits of early Kenyan tribes people.

EWT’s involvement with the Adamsons came through Marlin Perkins’ wife, Carol. The Perkins were deeply involved with the Adamsons charities after featuring their work in the wilderness in several of Marlin’s Wild Kingdom television episodes.

Carol was specially close to Joy and would almost always begin her safaris by taking her small group of friends by charter aircraft directly into the Adamson’s camp. Few other people were welcomed there.

Their tragedies came at the end, separately but the same. Both were murdered by bandits – nine y ears apart – as they stubbornly refused to leave their little homestead in an increasingly lawless part of Kenya’s great Northern frontier.