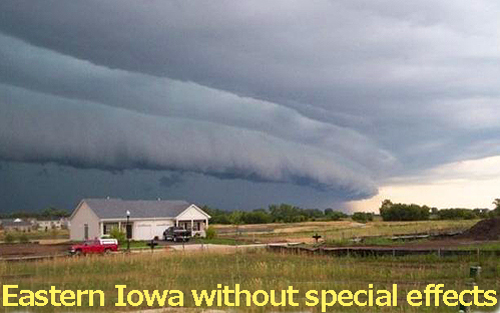 The heat, fire, floods and storms are not normal; we did not evolve to live in this. Finally it’s hitting us the way Africans have been clobbered for years.

Wake up! The Washington Post today had the courage to say it: This Is Global Warming.

The meekness with which we morphed “global warming” into “climate change” amazes me. Call a spade a spade! Kudus to the Post and everyone with the courage to speak the truth.

Our increased technology has shielded us from the suffering that undeveloped peoples have felt for decades. Natural disasters impact us less than undeveloped regions, for the obvious reasons that our shelters and rebuilding apparatus is so much better.

But maybe now the tens of thousands of disbelievers without a/c unable to watch the quarter finals at Wimbledon might now understand what the less fortunate in the world have been dealing with for decades.

Global Warming Causes Natural Disasters. Unlike increased levels of CO2 and the inevitable suffocation it might cause us in oh 200 years, earthquakes and landslides and derechos (what is a derecho?) are here and now.

Today in Sendai City, Japan, world leaders meet to figure out what to do about the increased level of natural disasters since 2000. It’s a fitting location because yesterday Japan restarted a nuclear reactor.

According to the UNDP, natural disasters since 2000 have killed more than a million people and affected over a quarter of the global population. And they’ve cost upwards of US$1 trillion.

Most of this suffering has been in Africa. And the UNDP is necessarily polite and unprovocative. The conference could not have been arranged if fingers pointed to those guilty, but there are those who are guilty:

(1) Carbon Emitters. Global warming is easily blamed for flooding: (ice melts). But melting leads to boiling, cracking and all sorts of other wanton destruction.

(2) Baby Makers. Mankind is growing faster than he’s learning to take care of himself. And yet we rile over China’s one-baby policy.

Africa has joined many prominent nations in trying hard to find remedies. Remarkably, the continent has cut its birth rate even while the developed world bellows it’s not enough. But when Africa points out how wasteful and dirty are the world’s principle carbon emitters, there is a deafening silence.

Africa and the developing world has suffered for a generation mostly because of nothing they’ve done or could have done. Global warming comes from development, from factories and cars and airplanes. It doesn’t come from subsistence farming.

Have you heard the TV guy say, “not in a generation”, “hottest on record”, “never before” more and more? It’s not a fluke, Joe. Hurricanes and sharks in Cape Cod. Snow storms in Mobile. It’s hotter than we can stand for very long. We’re using Spanish words to describe storms that alone can take down Twitter.

Maybe the blind eye is ready to open up.