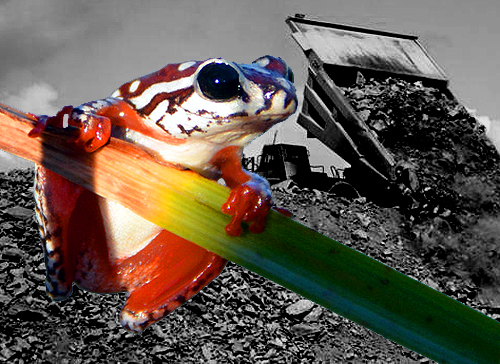 The battle between fossil fuel mining and the environment has moved into Botswana’s main tourist attraction, the Okavango Delta.

The photo above of a painted frog was taken by EWT client, Melissa Michel, this year. The background of a mining waste dump is compliments of Rio Tinto.

Tourism in the Okavango Delta is the second largest source of Botswana’s GDP, after mining (which dwarfs it, by the way: 40% vs 12%).

Exact figures are hard to confirm, because the government has not defined how government and ancillary industries like educational training and direct contributions contribute to or diminish the tourism and mining sectors. But clearly mining is 3 to 5 times as important as tourism.

Historically most of this was with diamonds. Botswana is the world’s largest diamond producer, but several years ago the government recognized that “diamonds aren’t forever.”

This led to increased fossil fuel exploration and bingo, there’s a lot of it. Relative to diamonds, coals lasts forever.

The largest Botswana owned company, Tsodilo, listed on the Toronto stock exchange, recently announced plans to mine more than 440 million tons of iron ore, and with less fanfare, a rather sizeable amount of coal.

Botswana’s chief mining official said that Rio Tinto, the world’s largest mining company, would be the principal in coal extraction.

“The future of Botswana mining is going to be the coal and iron ore resources…,” he said before adding as an afterthought, “and of course diamonds.”

Botswana is already the 65th richest country in the world. This will likely push it up further.

Unfortunately, much of the iron ore discovered is underneath or close to the Okavango Delta.

Although Botswana has a variety of big game habitats, it is the Delta which is the draw. Unique on earth, it’s where a desert seasonally floods. This produces extremely unusual habitat as well as major deterrents to human settlement.

Over the eons vast numbers of endemic species have arisen in The Delta, many which remain to this area alone. These are mostly plants, amphibians and fish, but the area is also outstanding for more notable, rare and larger animals like sitatunga and wild dog. Many water fowl absolutely depend upon the Delta and many are extremely rare, like the Wattled Crane.

The world’s growing appetite for fossil fuels is as undisputed as the fact that most of them will come from Africa.

Why should Botswana be denied compromising its ecosystem for greater wealth, as Alaska and California did big time last century?

The answer is usually that the world’s just come too far. Time is not on their side, as it was with the Rockefellers and early gold diggers: The global warming apocalypse takes precedence.

That’s such a subjective argument it falls on deaf ears in Africa. South African environmentalists, however, are trying more clever answers.

Winner of the Goldman Environmental Prize, Desmond D’Sa recently explained that the argument that mining will “create wealth for the people” was fallacious. “We’ve seen the mining industry in South Africa, hundreds of years, has created impoverishment and poverty… The majority, the 99 percent of us in the country, are poor, are living in abject, poor conditions.”

And that’s true and compelling … for the instant. But what happens if – as many of us hope – this changes and there is a real redistribution of wealth? Like in China?

Reversing the world’s poverty is going to take a lot of industry. Protecting the unique ecosystems under which that industry is fired will be no small task.