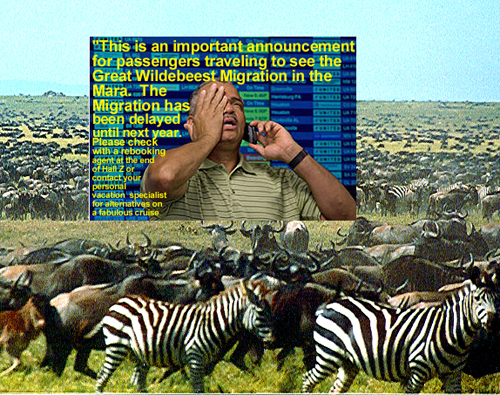 Normally around a million wildebeest would still be in Kenya’s Maasai Mara at this time of the year. The Mara is the northernmost point in the 1200-mile roundtrip migration, an elliptical circuit that historically remains in the Mara from around July – October.

The herds which zigzagged back and forth at the Kenya/Tanzania border the last half of July finally moved en masse into Kenya around the first of August only to leave hardly a month later. If another decampment from Tanzania doesn’t occur, it will be among the shortest stays in Kenya ever.

The reason this matters so much is that tourists can’t follow the herds across the Tanzanian/Kenyan border. Only animals are allowed. Even if you have all the right visas, authorities on both sides of the border won’t allow you to follow the tracks and roads or cross the bridges used by the wildebeest.

Tourists have been prohibited from traveling between Kenya and Tanzania where the Serengeti and Mara converge since 1979. So it’s been the situation for a very long time. As a result, tourists trying to find the great migration plan their entire vacations on historical patterns that don’t always prevail.

Not even global film crews, which used to have free reign, can today cross the Mara or Sand Rivers to follow the dust of the migrating animals.

Because the wildebeest are historically in the Serengeti for a longer time than they are in the Mara simply because the Serengeti is 20 times as big as the Mara, there are fewer tourists disappointed who plan to see the migration in Tanzania than Kenya. But there have been years when even Tanzanian great migration plans have gone awry.

But this year’s very short stay in Kenya is not as apocalyptic or even as unusual as you’d think listening to Kenyan politicians, today. It’s remarkable how short some people’s memories are.

The great wildebeest migration, like virtually all animal and bird migrations, does not follow inflexible patterns. Migrations are hard-wired into some animal brains, but they are triggered and steered by environmental events.

Mostly by where the food is. The warbler migration that is just about ending where I live near the northern Mississippi river began ridiculously early this year, with blackburnians appearing in late July, easily a month early.

But then they stayed. They just didn’t keep moving south. Why? Because of bugs. We were just ending a drought and with a little bit of new rain, there were suddenly mosquitoes and gnats and tree beetles that had either become dormant or whose life cycles had been slowed waiting for rain.

The same can usually be said of the caribou migration in Alaska, the whale migrations into and out of the nutrient rich northern waters, and … of the wildebeest migration.

In the case of the wildebeest, when the rain is just as plentiful in the northern Serengeti (as it was last year) or just as scarce (as it is this year) in Kenya, there is much more opportunity for grazing in Tanzania than Kenya for the simple reason there is so much more land.

Historically the northern Serengeti dries up completely in July but rains continue to splash the Mara right until October. This year, like last, there was just as much rain in one place as the other.

So contrary to Kenyan politicians who like to find disaster in their teacups, it’s not necessarily because of the Mara’s bad roads or exploding licenses for new tourist camps and lodges, or even because of Maasai poisoning lions or teenagers honking car horns.

Not that the wildebeest like any of that, and to be sure, the Mara would be a better place if all that were remedied.

But until Kenya’s bigwigs figure out a way to turn off the rains in northern Tanzania while turning them on in Kenya, there’s going to be very little they can do.