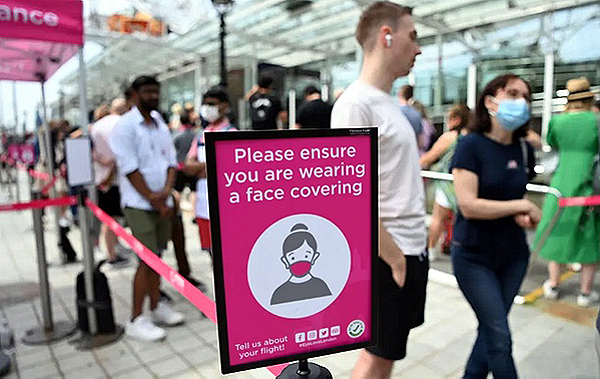 Seven of us returned from 3-4 weeks in Tanzania on Thanksgiving Day. This is a report of the formalities required with regards to Covid. This is a very small sample of how people travel to and from Tanzania, but every little bit helps.

Like all unexpected obstacles to travel, it’s usually a lot easier than presumed. I often refer to the time in 1970 when New Orleans announced the first metal detector for departing passengers. For a year no one flew through New Orleans. Today it’s second nature to us all.

Two of us came from Chicago, one each from Portland and San Diego connecting through Salt Lake, and three from Atlanta. All of us had our negative PCR tests and vaccination histories examined at the first point of check-in.

Some got their PCR tests at pharmacies like Walgreens or CVS, others at their local hospitals and clinics. I spent hardly four hours the morning before I flew getting my private physician’s nurse to fax testing orders to my home-town hospital, where I was tested and got the results after 20 minutes.

Masking was mandatory in the airports but once in the upper class lounges masking was voluntary and infrequent.

Once in the lounge before the flight to Amsterdam we were within 24 hours of arriving Tanzania, so we could complete the online health documentation required by Tanzania for entry. One unique mobile phone number was required for each individual arriving. Couples could not, for example, use a single number. The form could be completed on either a mobile phone or by using a laptop or tablet.

The health declaration was pretty straight forward and easy until it came to the end where you were asked to prepay for the antigen test that would be administered by immigration on arrival. Much of it was in Swahili although there was enough English that a patient traveler could figure out what to do. The next problem was that the portal for payment often crashed, so multiple attempts were required before a receipt was obtained.

That receipt would be critical after landing in Tanzania, so many of us were able to use the lounge’s printing services to obtain a hard copy. Otherwise we made sure to copy the receipt number and organize our phone in such a manner that the document could be easily retrieved.

AirFrance requires surgical masks on all its flights and handed them out to passengers who didn’t have one. KLM and Delta adopt the same policy but they were more tolerant of an individual’s mask regardless that it was or was not surgical.

Everyone met in Amsterdam for the flight down to Kilimanjaro on KLM. Schiphol has a very strict set of rules including masking in the lounges. This was regularly enforced by local KLM staff. No further examination of documents occurred at Schiphol provided you already had your boarding pass for the connecting flight.

Unlike the somewhat lax enforcement on the SkyTeam’s flights from the U.S. to Amsterdam, flight attendants were pretty strict on the flight to Kilimanjaro regarding masking.

The real fun started in Kili. There were six desks, only four were manned, placed outside the terminal on the tarmac where each arriving passenger had to show that all important receipt for having paid for the antigen test. If you didn’t have a hard copy a supervisor would appear and confirm on his computer the receipt number which you had copied. You were then sent into the airport for the antigen test.

There were four booths, all staffed, and each incoming passenger was swabbed twice. One up the nose and one in the mouth. You then went to a sitting area to await your results. In the beginning the results came quickly: mine took only 19 minutes. However, as the plane unloaded and the lines bunched up results were taking well over a half hour.

None of us saw anyone who received a positive test result.

Then, you were in. The formalities thereafter were the standard passing through immigration for the validation of your visa, the collection of luggage and the screening by customs before you finally left the airport.

For persons like myself who were at the head of every line the whole process took around 50 minutes. I talked with others for whom it took four hours.

The next formality began our return home as the safari came to a close. I scheduled our PCR tests as late as possible, three days prior to departure, and I’m glad I did.

We had our swabs at the FAME clinic in Karatu just outside Ngorongoro. There are currently five locations in northern Tanzania where these tests are conducted for visitors returning home: the Seronera airport in the Serengeti, two national hospitals in Arusha and one national hospital in Moshi.

I know the medical director of FAME and he has been doing wonders in northern Tanzania for almost 20 years, so that’s where I felt the most reliable testing would occur. This isn’t just the actual testing, but making sure it’s properly transported to the national testing center in Dar in a timely way.

All tests are processed only in Dar.

Our results came to our individual emails almost exactly 48 hours after we were tested. My manager in Arusha also obtained copies of our results and so gave all of us printed copies that we used to check-in at Kilimanjaro. Other than showing these results to the check-in clerk, there were no further Covid formalities and check-in was as ordinary as it was pre-pandemic.

Although there was a sign as you entered the Kili airport that masking was required, few security staff and only about half the passengers masked at any time.

Masking, however, was enforced by KLM personnel once on the aircraft. No further formalities occurred when exiting the plane back into Schiphol airport. But prior to your final flight to America everyone was required to submit an Attestation of Negative Testing. This apparently fulfilled the CDC requirement which I had expected would be checked when arriving home. It was not. Arriving home was identical to pre-pandemic formalities with no additional queries regarding testing or vaccination.

I returned to Chicago. Every hall in the terminal had a large sign reminding you to mask. There was a loud PR announcement advising that not masking was a violation of federal law and subject to serious fines. Not a single immigration, customs or airline employee, however, masked. Around the carrousel I seemed to be the only one of dozens waiting for their luggage who masked.

Once outside the terminal, no one masked, not even me.