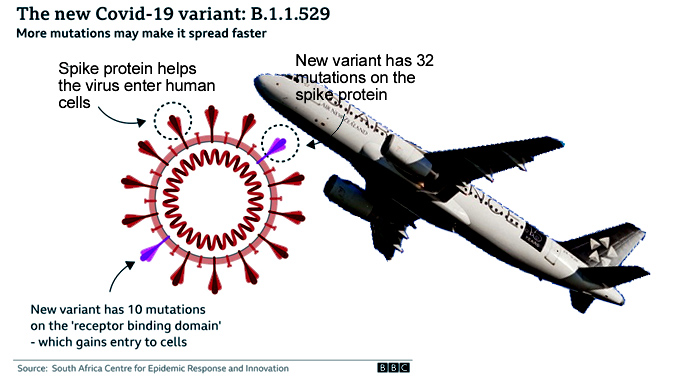 2-3 more weeks before we know how Omicron effects upcoming travel. The demographics of Omicron patients are right now being compiled: age, are they vaccinated and how many times and with which vaccine, are they a breakthrough? Laboratories around the world are mixing their serum with the antibodies current vaccines produce. What happens? One, two, a hundred experiments aren’t enough. 2-3 more weeks.

America is a horrible place to try to figure this all out. We’re either alarmists or aggressive reactionaries to alarm. But there are authorities and sources that if we’ll just be patient enough will give us good answers. 2-3 more weeks.

The Washington Post and the BBC published articles this weekend that succinctly explain what we so far know. This is a summary of those articles filtered to contribute to recommendations about travel.

The virus variant is spreading rapidly around the world after its first identification in Hong Kong on November 11. Most authorities believe it originated – or first massively spread in southern Africa.

Fortunately the science in South Africa is so sophisticated relative to most of the world and even many parts of the West, and the government there so transparent regarding what it knows, that a lot is already known.

In South Africa cases rose 592% in a two-week period. “Most” of those (exact numbers are being compiled) were unvaccinated under 30 years old. (The younger age metric might not fully reflect infections in other parts of the world because such a larger percentage of South Africa is so young. Roughly a third of the population is teenage or younger.)

The head of the South African Medical Association “told the BBC that the cases found so far in South Africa – where only about 24% of the population is fully vaccinated – were not severe.

“The patients are mostly complaining about a sore body, extreme tiredness and we see it in the younger generation, it’s not the older people… We’re not talking about patients that might go straight to a hospital and be admitted,” Dr Angelique Coetzee said.

For those of us anxious to travel and who are fully vaccinated, we need to know if the rate of breakthrough cases with Omicron is different than with Delta. I just returned with seven persons from nearly a month in Tanzania. We’re all fine. Verifying how many new Omicron cases are actually breakthroughs will take the most time.

The greatest threat right now to travel, in fact, is not Omicron but the reaction to it.

The world is closing down, again. Led by the UK almost all of Europe has now banned any flights from southern Africa and many have reimposed testing requirements for travelers arriving from anywhere. This wrecks a seamless itinerary to distant parts of the world that connect through Europe.

So travelers, don’t do anything for 2-3 weeks, but once some sound understandings come, examine them as dispassionately as you can. Travel inspires the soul. We need that more than ever right now.