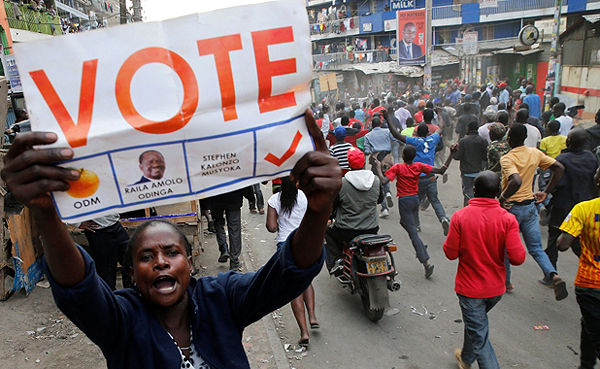 The first week of August is the most important week in my business. I’m usually home from safari, I settle down in front of tons of reports, access to my meticulous notes of more than twenty years, screens of internet and I survey the African political landscape.

Looking for upcoming elections. Once found I have to place a couple bets. Will they be violent or non-violent, and if non-violent will they still be disruptive or not? Then I place my bets and make the final touches on my winter safaris.

Elections in sub-Saharan Africa are usually in the fall or winter, especially in East Africa where I specialize. I’ve been doing this for a long time, so I’ve lived through dozens of contentious elections and quite a few violent ones.

If I predict correctly, I can avoid them by avoiding the country that’s holding them. In the case of Kenya, unfortunately I might still have to fly my people through Kenya, but at least I could avoid staying there. Kenya has had a number of contested and several very violent elections.

It’s not as easy a call as you may think, especially if you’ve never been interested in traveling to Africa in the first place.

There are special attractions in every country that other countries just don’t have. Most of my winter and spring safaris are sold well before August, so if I decide things aren’t going well, I have to tell people who’ve already put up some money that they’re not going to where they thought they were.

It was really hard when I was young. But with a couple lucky breaks and some spot-on decision-making, my reputation grew and people began to trust me.

You see the strongman in power has enormous sway over the outcome. I’ve learned how naive and foolish many democrats are, believing so deeply in democracy that they see it as some first principle, inevitable by design.

Hardly. Most of the time the election commissions which run African elections are stacked with the strongman’s supporters. Often it doesn’t matter that the legislature has enacted laws protecting the simple rights of voters. It’s the commissioners who implement those laws and often they only do so if it supports the strongman. Otherwise, they simply disregard the law.

One of the ordinary tricks was to clog up polling places. They understaff them or threaten the workers who planned to man them with sickness or loss of job. They shortened the times the polls were open. Electricity and other public responsibilities like delivery services were inhibited. At the last election in the DRC they simply cut the number of polling places in half.

Many elections, violent and non-violent, ended up in the courts. Most of the courts were packed by the strongman in power and it’s remarkable how easily they disregarded the will of the people and found some creative analysis to bend existing law to a desired outcome.

“Rule of Law” isn’t any more sacrosanct than democracy.

Because Africans traditionally are so poor off to begin with, rampant with disease and high unemployment, the enthusiasm for the election was left to the rich and powerful. It wasn’t that people intentionally voted against their self-interest. They’d just given up.

What they wanted more than a victory was peace.

How many times I’ve heard that phrase is prophetic. Peace more than victory. Just give me some peace.

One hopeful sign has appeared in just the last few years. The courts started to act right.

By right I don’t necessarily mean by the “letter” of the law, since clever jurists like creative lawyers are capable of generating almost any outcome out of any situation.

But the courts started to manifest the will of the people. That usually doesn’t arise from hundreds of years of jurisprudence through changing language. The will of the people is usually starkly evident. That’s what happened the last time in both Kenya and South Africa.

Anyway, I don’t have to worry about it this year. There’s no business to Africa.