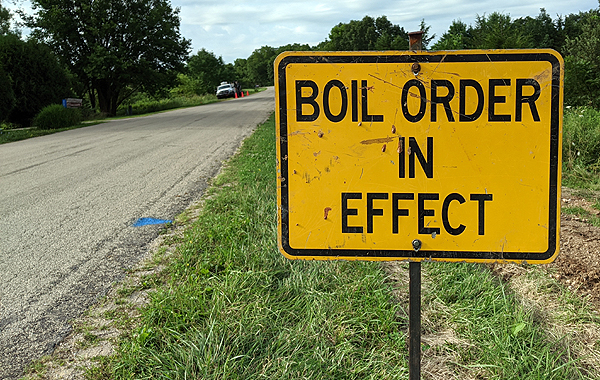 For my African friends. Well… all my friends, and especially for those who live near Galena, Illinois.

Stick with me through this story because it’s complicated.

Several weeks ago Trump issued executive exemptions for professional golfers (among others) to America’s ban on South Africans entering the U.S. The reason America had that ban is two-fold:

Two days ago a local fiber optic cable company began installing its lines not far from my home. They started digging the trenches, coincidentally, when South African golfer, Briton Lee Westwood, told reporters in Britain where he’s playing at the British Open that he would not avail himself of Trump’s executive exemption to come to play at the FedEx Invitational in Tennessee next week.

“I’m still concerned that America doesn’t take it as seriously as the rest of the world,” Westwood said. I couldn’t agree more.

I live in a rural area that Africans would hardly consider rural. We have three golf courses here and today I saw lots of people playing golf, none wearing masks and no one social distancing on the greens.

It will be hard for many Africans to imagine a rural locality with three golf courses. But in terms of population density, it is. My nearest grocery store is 12 miles away, where the post office is as well. My nearest Starbucks or cinema is 42 miles away.

In addition to my “territory’s” three golf courses, it also has a waterfall, horse stables and 35 kilometers of manicured woodland hiking trails. It’s designed as much for city people in places like Chicago who park their extra money in weekend houses in the country, as for people like me who live and work here.

Now water main breaks happen naturally all the time in America. Much of our infrastructure is getting very old and Americans hate paying taxes so they’ve left a lot of these pipes to corrode. There are water pipes in the city of Chicago which are nearly 150 years old.

Not the case where I live. My water pipes were buried forty years ago.

That’s because we don’t like paying taxes. So finally a private company laid the cable and three months ago before I ditched them I was paying $500/month for phone, television and internet from the single company that laid the cable in 1984.

In Ruhengiri, Rwanda, near several safari lodges that I use before trekking to see the mountain gorillas, several private companies compete to lay and sell fiber optic cable. One, FastNet, starts at $275/month for 100GB, which is 54.7% of what I was paying in Galena, Illinois, United States of America.

Unfortunately in the United States of America most cable companies are exempt from many anti-trust and anti-monopoly laws, so in all of northwest Illinois we had only one cable company for forty years.

Until Obama. Obama transformed our area in many ways, but two of them were wind and fiber optic cable. Not far from my house there are great wind fields that now provide my area with nearly 17% of its electricity. That happened because of the stimulus package that Obama was forced to create after inheriting the Big Recession from Republicans. And that package also included money to bring fiber optic cable to rural America.

That was in 2011. It’s now 2020 in Galena and Lagos. Obama lost some of his power midterm when Republicans regained control of Congress, so he tried to preserve all his good work with an executive order in 2015 pushing cable at government’s expense to the rural parts of our country.

(You might have noticed that in the last several decades America is governed more by the executive orders of its presidents than by legislation from its elected representatives.)

So when Trump came to power he reversed that executive order. Alas here in this poor rural part of America, we remained without affordable fiber optic cable.

UNTIL! People Power! The people of the area actually own the utilities. This has become harder and harder to do in America but here in Galena the Sand Prairie Internet of the Jo-Carroll Energy Cooperative of the Touchstone Energy Consortium scraped up the government leftovers of money from the Obama era and laborious, tediously and very slowly but noticeably began laying fiber optic cable near my home. They started three years ago. Haven’t gotten here, yet, but I see them on the road all the time.

You may have heard about the Republican’s dislike of wind and sun and electrons. They prefer oil and gas and hydroxychloroquine. My African friends use that last one for malaria. Republicans use it to get sicker.

So through a plethora of executive orders and defiance of court rulings Trump and the Republicans decided they would bring gas lines to me. Unfortunately I can’t use them because my house is all electric. I spoke to neighbors nearby who use propane delivered in big trucks, and they said the gas line offers are too expensive. So we have gas lines that nobody is going to use.

My poor, hardworking Sand Prairie Internet has been digging trenches methodically near my home for three years then bam! Suddenly in the same area came twenty times as many trucks and backhaulers and workmen from a company in New Jersey to dig trenches and lay gas lines fast before the Republicans are kicked out. And I could dare to create a conspiracy theory that they have another mission, too.

Now what law survives in America often has had all its active regulations stripped from it. But once upon a time when the bluebirds were singing before Ryan Construction took down the Bluebird boxes to lay gas lines, there was a regulation that said two companies couldn’t dig trenches in the same place at the same time.

Not today! So yesterday my water main was destroyed as a backhauler competed with another backhauler to dig a trench at the same time near the same place. And now I have neither affordable fiber optic internet or potable water. Oh how I miss Africa.