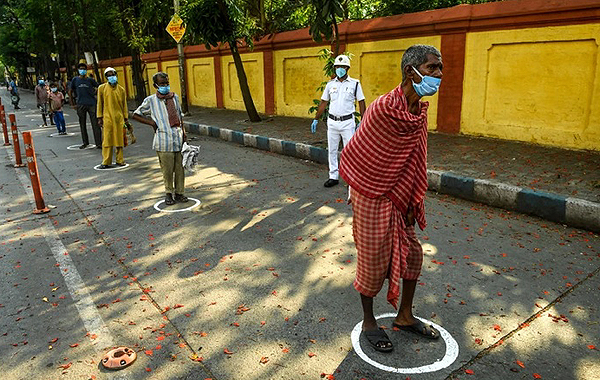 In a wildfire if you have the capability you dump the water on the largest blazes. When we get a vaccine will we direct the first doses to the worst outbreaks?

It’s daunting trying to predict where the worst outbreaks are now much less where they will be. Using Statista today the U.S., all of Europe and the U.K. are at the top of the list for deaths per capita, yet there is not a single African country, or Southeast Asian country in the top 50.

How can that be?

I know Africa better than most westerners. Polio persists in Africa. Malaria is a scourge. Infant mortality, life span, and a score of other metrics precisely measured by the World Health Organization worldwide consistently show Africa worst off.

But not in this pandemic?

There’s another set of numbers to consider: African country lock-downs. They are severe. What a number of African countries are doing, including Nigeria, Kenya and South Africa, would cause revolution in Texas.

Chad closed its airports and borders and issued lock-down rules before a single case of the virus was reported anywhere in the country.

So there’s an enormous disconnect between “the numbers” and the response of African countries and the developed countries.

In fact it’s upside down.

In disconnects, either the analysis is goofy or one of the number sets is wrong.

I’ve got to go with one of the number sets is wrong. My conversations and correspondence with Africans suggests it’s much worse than the numbers reflect. I’m not alone.

Reporting from the country statistically the worst off in the world from Coronavirus, Belgium, Euronews’ political editor concludes, “The most likely answer is that the virus simply has not properly taken hold in Africa yet… Most of Africa is less well connected than Europe or North America, but the virus will, in all likelihood, eventually take hold. Dire predictions may well still hold true.”

Reporting from Africa is flawed because their infrastructure for gathering statistics as well as raw news is weak. Hospitals are few and far between, and even though they don’t report that they are yet overwhelmed, that’s likely because most hospitals in most of Africa are basically gigantic emergency wards. Sick with less than an instant calamity do not go to hospitals.

Here at home we think of this disease as an imminent threat. Imminent threats in Africa are terrorist bombs, violent banditry, car wrecks, ferry sinkings and building collapses. Covid-19 rarely comes on suddenly.

Testing is limited and the virus’ symptoms are not well distinguished from dozens of other sicknesses like pneumonia that plague Africans constantly. The decision to go to a hospital for such symptoms is reserved for the well connected urban dweller.

But… there’s a second disconnect:

If things are getting worse, and especially in Africa, why is everyone opening up? Including Africa? If we know that things are going to get worse, why are we opening up?

There are two parts to this answer and they’re both pretty obvious.

1) We’re now schooled in social distancing and detoxification. If we have the forbearance to forego the NFL and political rallies and be extra mindful of our wipes, we can move towards normalcy.

2) This applies equally to Nashville or Nairobi. Those who survived are getting fed up. Their thresholds of safety and empathy for the most vulnerable have been breached.

Perhaps the good economic minds of the world have actually seen the balance scale with clarity and have decided that more suffering from the virus is now overtaken by more suffering from quarantine and suppressed economies. Suicidal megalomania infecting world societies today might even be distorting these judgements.

Regardless, it doesn’t diminish the conclusion that things in Africa are going to get really bad.

We’re in the throws of the pandemic in the developed world right now. I see the time coming when we get a vaccine just when the developing world’s unimaginable suffering becomes recognizable to all.

So where should the first doses go?