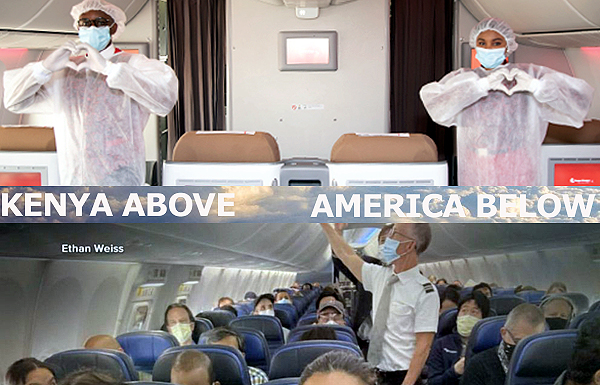 About a month back many sub-Saharan African tourist companies announced with great fanfare plans to restart. No one came to the party. The only tourism that exists today in sub-Saharan Africa is local, and even that’s pitifully little.

Kenya Airways, Qatar, Emirates and Lufthansa appear now ready to join Ethiopian Airlines with limited flights into Nairobi some time in August but all the indicators are that none of them expect tourists for a very long time.

The other two countries with important airports in sub-Saharan Africa are South Africa and Tanzania. South Africa has yet to give the green light for any international travel and in fact this weekend pulled back some of its reopening plans as cases surged.

Tanzania has had its airports open since the end of May, but only Ethiopian flew into them. The whole world knows that the virus is out of control in Tanzania.

Friends in the industry compare Tanzania to the U.S. There are no statistics whatever available from Tanzania so all the news is anecdotal. WHO was kicked out long before the U.S. broke its relationship, and the lack of veracity in our State Department makes me reluctant to trust any messages coming out of our embassy in Dar.

“Based on currently available information,” the reliable British embassy in Dar-es-Salaam reports, “there is a high risk of exposure to COVID-19 in this country. [Bold-faced]: All travelers are advised to avoid non-essential travel to this country.”

This is personally difficult. Several of my staff in Tanzania are sick, although they don’t know if it’s Covid-19, they can’t be tested and several have already recovered. They’re increasingly reticent about telling me anything, for example about family members. The political climate in Tanzania is terrifying at the moment. Individuals are seriously threatened by officials if they suggest anything is not doing well.

Neighboring Kenya, on the other hand, is doing relatively well. After one of the strictest lock-downs in the world, the country is cracking open carefully. President Kenyatta, though, has cautioned he has no hesitation closing the country down again if the current stabilization doesn’t continue.

This week Kenya Airways begins a dozen flights daily within the country between the two important cities of Mombasa and Kisumu, and Nairobi. It’s been almost four months since KQ flew a regularly schedule.

Unlike American or United Airlines, middle seats are not filled, all passengers have to wear masks and flight attendants will be dressed as you see in the picture above.

There is no belief that these travelers will be leisure travelers. Business travel and cargo is much more important and the new fares these airlines have just announced reflects this.

Between Amsterdam and Nairobi, whether on KQ, Lufthansa, Qatar, Emirates or Ethiopian, the fares are today roughly twice what they were in January of this year.

Published airline fares represent what professional actuaries believe customers will pay, and they then change like stock quotes, so we’ll see when things really start up in the next few weeks.

A significant additional difference from pre-Covid, though, is the remarkable relaxation in rules. Almost all the fares I could quickly survey allow for free cancellations and change, often right up until the time of departure.

Put all of this together – how businesses, airlines and flyers are reacting to this opening up, and there is cautious optimism that nontourism business interaction between Africa and Europe will begin, again, soon.

But not with America. We Americans are banned from entering either Europe or sub-Saharan Africa. We would infect them.

Whether it is “the sorry gaggle of Republican politicians” as believes South Africa’s Daily Maverick today, or just stupid American bravado, it seems no other people in the world have managed this pandemic as badly as we have.