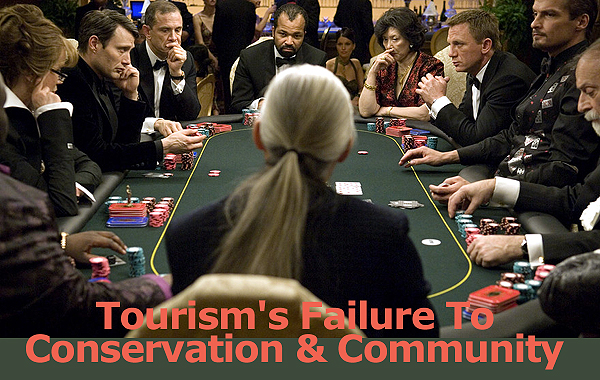 The virus has unmasked many of our lies and failed promises in terrible ways. It’s also revealed how inhumane much of tourism is.

The lack of upmarket safari business is seriously damaging conservation throughout sub-Saharan Africa, stripping away the feel-goodness of charity for what it really always was: a sales tool.

Slowly, methodically and with what we understand now was deadly precision, almost every company in sub-Saharan Africa serving luxury tourists bundled charity into their product cost.

In other words, with no prior consent upmarket safari customers paid for all sorts of conservation and community development.

Most customers like it. It made them feel good. Many safari clients personally expanded their generosity by increasing their donations to specific projects that were first introduced to them by the company that they used for their luxury vacation.

Over not too many years these conservation projects became an essential part of the marketing of these companies. Within the last decade so much of the industry adopted this model that companies that failed to mandate charitable work in their consumer prices were considered unethical.

My oh My, you know what happened.

No business. No charity. No conservation.

This isn’t true throughout the entire industry. There are a precious few companies with large enough endowments that they can continue at least some of their charity work despite lacking sales for the consumer product.

It’s uncertain, though, how long a small endowment can last, and endowments are generally not public information. I know of no company which has promised to continue its pre-Covid level of charity into an unforeseeable future.

The vast majority of companies, however, sounded the alarm quite publicly not too long ago when it became apparent tourism reopening was delayed.

I’ve spent years listening to local safari company executives forsake government taxes and proudly detail schemes to avoid them. One of their arguments was that the government wasn’t doing enough for either social development or conservation.

So instead these companies built into their business model an alternative tax that would, according to them, provide these basic human and conservation needs.

There’s no question that the Tanzanian government has greatly reduced its support for conservation and anti-poaching during this economic collapse caused by Covid-19.

But compared to the federal governments of most of the other sub-Saharan countries, including Rwanda, Kenya, South Africa and Botswana, any reduction in government funding for social or conservation programs is fractional compared to the drying up of the alternative programs that had been underwritten by safari companies.

In general all private charity’s Achilles Heal is the uncertainty that the missions will continue to fruition. Governments and global NGOs provide this essential certainty. Sub-Saharan tourism businesses can’t.

Nothing is more devastating to any social or conservation project than to have its funding abruptly ended. Creating charity that depends upon commercial profit is unconscionable.

Many safari companies tried to salvage their failing by appealing directly to former customers to bail them out. Others began mechanizing retail items (like face masks with logos of safari companies) with the questionably stated purpose of supporting their previous conservation efforts.

Others created business partnerships with companies supplying clothing or photographic equipment, for example, to garner the commissions in place of their lost safari business.

None of this will be anywhere near sufficient.

So the post Covid landscape in Africa’s safari business will be even more horrific than we first thought. Not only will some safari businesses be wiped out, but the local communities that had grown dependent upon them may be, too.