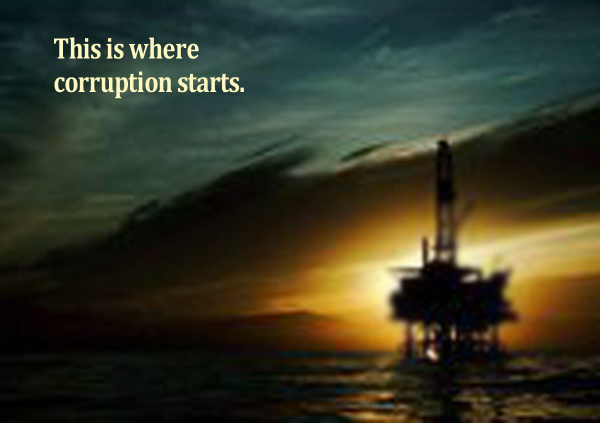 “Etete can smell the money. If at nearly 70 years old he turn(s) his nose up at nearly $1.2 bill he is completely certifiable. But I think he knows it’s his for the taking.”

This is an email from a consultant to a top-notch, highly educated, church-going multinational Shell oil executive referring to the bribe offered a Nigerian oil minister so that Shell could get control of one of the largest oil fields on earth. It was published by BuzzFeed working with by Global Witness.

We call this market capitalism. When done with sufficient finesse it’s not even illegal in the U.S. This is how the world goes round. Details at the Secretary of State’s office.

There is so much to this story, I don’t know where to begin. For Africans it’s so important to underline that corruption doesn’t begin with them. A poor man’s bribe gets you another cigarette butt. Meaningful corruption has paralyzed much of Africa, but it isn’t an African disease: it’s a western-made-to-order phenomenon, and an event like this is the perfect illustration.

Fast forward to a courtroom today in Milan. As I write this sentence Claudio Descalzi is standing before an Italian magistrate pleading not guilty to international corruption charges that were levied against him in February, because technically it was his Italian oil company, ENI, which paid off the Nigerians.

ENI wouldn’t normally have $1.2 billion cash lying around. But ENI had a partner, Shell. When the deal was completed ENI and Shell jointly owned the field.

Whatever you might think of Italian justice think this: no such charges could be levied against a British or American oil executive for having done the same, unless it had somehow clearly involved the governments of Nigeria and/or the governments of those executives. That might be established, but not so far.

Even though the charges against Descalzi were public more than a month ago, it was only last week that Shell admitted the bribe:

“After repeated denials in various countries, Anglo-Dutch oil giant, Royal Dutch Shell, on Monday finally admitted it had foreknowledge that the $1.3 billion itself and ENI paid to [the] Nigerian government for the OPL 245 oil block licence would ultimately be used to settle convicted former Minister of Petroleum, Dan Etete,” one of Nigeria’s main newspapers reported this morning.

Etete has been convicted of all sorts of shady stuff in Nigeria, France and elsewhere but currently lives pretty much immune to further prosecution in Britain. Remarkably back in 2011 he still held the keys to one of the world’s biggest oil fields. The business decision was simple: ‘If we’re to get our hands on this, we’ve got to get “The Etete Problem” off the table.’

The bribe among other things “settled” a score of outstanding litigations against Etete in Nigeria, so that the deeds of sale could be cleaned up. Of course not even Roy Cohn’s law firms charge $1.2 billion to clean up documentation. Eventually we’ll learn that the money went to top Nigerian government officials, probably including then President Goodluck Jonathan. Goodluck. Jonathan.

Only a few days before this email surfaced, with double-knot windsors tightly strapping their throats, ENI, Shell and a host of other oil executives denied any wrong-doing in interviews with Nigeria’s Guardian newspaper.

“Shell attaches the greatest importance to business integrity. It’s one of our core values and is a central tenet of the principles that govern the way we do business. All employees are expected to uphold these principles and failure to do so will result in consequences up to and including dismissal.”

Well, that was before Buzzfeed uncovered a truckload of dirt about a week ago. The email I opened with above was sent from a senior Shell advisor, Guy Colegate, to Shell executive vice president, Guy Outen.

At the time Shell employed a former MI6 agent, John Copleston, who then confirmed when Etete had received the money. He emailed then Shell’s Vice President for sub-Sahara Africa, Peter Robinson: “Saw my Delta man. 245. He spoke to Mrs E[tete] this morning. She says E claims he will only get 40m of the 300m we offering – rest goes in paying people off.”

According to Buzzfeed, even Shell’s legal team was deeply involved and in fact expressed concern about the whole deal. But cool heads prevailed. After probably accurately reviewing most of the laws in the world that allow bribes the legal team concluded, “Many legal risks remain… particularly the risk of an unknown third party participant and difficulties with securing future cash contributions… Nevertheless, speaking for Shell Legal, we will do everything within our control to bring this painful matter to a satisfactory conclusion.”

So you get my drift. Legal charges proceed against a secondary oil giant in Italy. But Shell is still working the OPL245.

And I still pull into Shell gas stations to fill my car. I don’t even look at the marquees anymore. Nigerian bribes. U.S. Secretary of State. Rostenaf waiver. Oil is oil. I got to get to the pub.