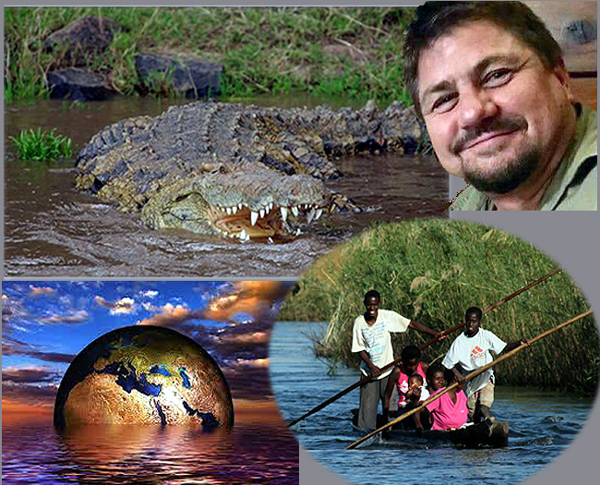 So there are three parts to the story of Scott van Zyl getting eaten by a crocodile last week in Zimbabwe.

Zimbabwe has collapsed so completely that yesterday the government ordered that all schools accept livestock for any fees from students or suppliers. We’re predating the Enlightenment here.

Yet one sector continues to flourish: hunting.

Canned hunts are particularly doing well in Zimbabwe because the Zimbabwe government has put no restraints whatever on that industry. The disaster with Cecil several years ago prompted neighboring South Africa to tighten restrictions there on hunting. But not here. Not in Alice’s Wonderland.

Van Zyl ran a canned Zimbabwean hunting operation called SS Pro Safaris. But that, and van Zyl’s residency, are in South Africa. He was in Zimbabwe because there aren’t any regulations there, and he could personally go hunting crocodiles with a pack of dogs. Can’t do that in South Africa.

Well, the tables were turned on Scott. Shortly after he went missing, a croc was discovered with an unusually large belly, killed and a person was found inside. Yesterday, DNA tests confirmed it was Scott.

This was the fourth confirmed croc killing of a person this year in Zimbabwe, and that’s the second part of the story.

We’ve been saying for, oh I don’t know maybe 20 years that Robert Mugabe is on his last leg. But we know he’s in his mid 90s, and recent photographs suggest either that he’s already dead or soon to be.

The country has fallen into an unbelievable crisis: no food, no money, no petrol. So … people are beginning to leave the country more regularly … sometimes just to find food. The longest and least patrolled border is the Zambezi River. Over the river to the north is Zambia.

I canoed that river several times when I was younger. We especially liked the 42k route from just east of Kariba into Mana Pools. It took three days and we passed 5000 hippos and 5000 crocs, and Zimbabwe was not in peril at the time.

Crocs are essentially our remaining dinosaurs. They go into deep somnolence for long periods of time then wake instantly when an opportunity for food comes near. After they eat they can lie dormant for months with nothing happening in them except digestion.

Part Three: Climate Change. You’ve read about the horrible droughts inflicting Africa more frequently, but the reverse is also true because the notable fact about climate change isn’t just increasing temperatures, but increasing climatic extremes. There has actually been a substantial increase in precipitation the closer you get to the equator. When there isn’t a drought, there’s a flood.

Right now there’s too much water in and around Zimbabwe and the Zambezi River. The river is spilling out of its banks all over the place. Sometimes, crocs are ending up outside peoples’ homes.

Canned hunting. Fleeing Zimbabweans. Climate Change. The only good news is for the crocs.