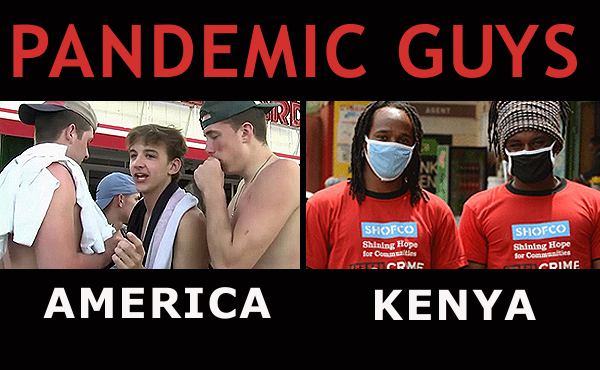 Kenya began reopening today, and Kenya had one of the strictest lockdowns in Africa if not the world. Kenya’s lockdown made New York’s lockdown look frivolous.

“You MUST become your brother’s keeper,” the Kenyan president declared in his order, today before listing all the mandates still required and warning that he would “claw back” everything should the virus reemerge.

“Civic responsibility is not a demand that can be enforced. It is a duty you pay to your fellow country-men for coexisting with them.”

Uhuru Kenyatta’s admonishments for Kenya’s “reopening” were more severe than anything a dozen American governors have dared to declare even as “recommendations” in the midst of their worst days.

Numbers are extremely hard to crunch especially when comparing a country like Kenya to America, but I can’t help but believe Kenya is much better off than America.

In reflecting on his previous orders that included a countrywide 12-hour curfew, no travel between any cities; all store-front businesses, schools and places of worship closed; and all borders sealed to the outside world, Kenyatta explained:

“My Administration opted for the health argument over the economic argument. We can always revive an ailing economy; we cannot bring back to life those who die.”

How simple. I felt so ashamed for America, so proud of Kenya when reading his edict.

“Remember that there are no unbearable responsibilities in the face of a crisis like the one we are in,” Kenyatta concluded.

How is it that a young adult in America, privileged beyond the belief of almost all Kenyan peers, finds not being selfish unbearable?

How can it be that the leaders of Florida and Texas are allowing so many people to die, relative to Kenya? Numbers are too unreliable to crunch properly, but I’d bet dollars to donuts that the death rate in those two states is exponentially greater than Kenya.

Is it because of the economy? Have Florida and Texas, and many other states, chosen “economy” instead of “lives” as Kenyan chose?

The combined economies of Florida and Texas were more than 30 times greater than Kenya’s in 2018.

This virus was the greatest surprise for most people worldwide in their lifetimes.

What about the Pandemic Guys? Is that a surprise, the difference between Kenya and America?