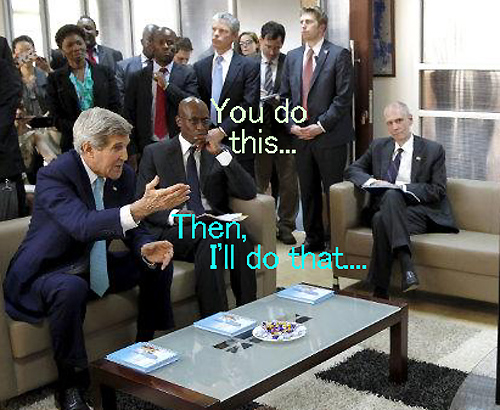 Politics is so damn slimy. I know how important Kenya is in Africa. I know how exceptional its youth, in particular, is and how imaginative its culture has become.

I know that in a future world, Kenya will be much more important than it is, today.

If I know it, then Bill Clinton, John Kerry and Barack Obama know it, too. The difference between them and me is that I don’t have to ignore the travesties of human rights that Kenya’s current leaders employed in their rise to power.

Uhuru Kenyatta should not be the head of anything except a mafia, and certainly his vice president, William Ruto shouldn’t be, either.

The two orchestrated horrible violence following the 2008 elections, ironically in part against one another’s followers. When the evidence for this was gathered then meticulously catalogued, and when the individuals supplying the evidence were sequestered under witness protection in Europe, not a man in the world – except them – denied it.

Then one by one the witnesses recounted or disappeared. The evidence dissolved. The two who had been arch enemies from different tribes that historically killed one another struck an alliance and were elected to lead Kenya.

The outcome, today, is that Kenya is prospering when many African countries aren’t. One could argue that the millennial enmity between the Kalenjin (William Ruto, the vice president) and Kikuyu (Uhuru Kenyatta, the President) tribes has been laid to rest.

The War Against Terror has been successful from the point of view of the United States, because the U.S. is much safer, because Kenya became the sacrificial lamb, invading Somali with American might and dollars and taking care of more than a half million refugees.

But Kenya doesn’t mind being the sacrificial lamb because the investment – much of it military – has raised it from the 13th to the 9th largest African economy in only five years.

I think Kissinger called this Realpolitik.

They’re happy. We’re happy. So why am I not happy?

I guess because in today’s world ends do justify the means. The timeline for this dynamic, though, is historically short. The longer a view you take, the less it’s true.

The machinations, manipulations, abject brutality and horror of Kenyatta’s and Ruto’s actions to achieve power have resulted in a more stable, prosperous Kenya and one that may even be tackling the most horrid affliction of emerging cultures, corruption.

Yet in accomplishing these lofty goals some very nefarious means were employed, among which is included sacrificing their own country’s peace and stability for America’s. The sale price was pretty good, though.

So as each level compromises to achieve something good by sacrificing a bit of morality, the ladder down to iniquity is built. It becomes institutionalized.

This logic is where I strike brotherhood with the Far Right… or the Far Left. It’s where compromise is bad.

Ultimately, I guess, it’s a matter of degree – how much you compromise for what ends – a very subjective exercise and who among us can judge whose subjectivity is correct? Me? Kerry? Uhuru? Bush?