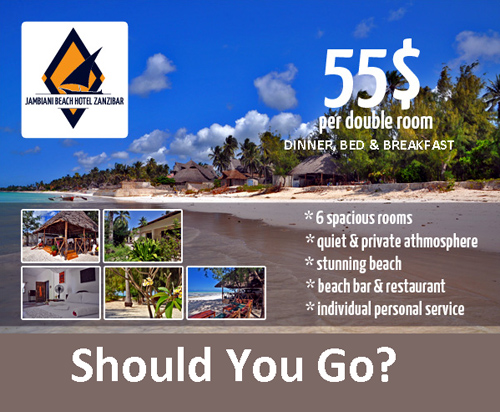 Tourism is collapsing in East Africa. It began with terrorism but terrorism is down yet it continues to collapse.

Today you can get breakfast, dinner and a decent sea-view room in Zanzibar for $27.50 per night per person sharing.

These absolutely ridiculous prices can be found for a thousand miles from northern Mozambique to Lamu in Kenya, among some of the finest and most beautiful beach properties in the world.

“Officials on Friday warned that tourism at the Coast was on the verge of collapse with 30,000 to 40,000 staff set to lose their jobs,” Kenya’s main newspaper reported today.

Occupancy at most coastal hotels is hovering around 20% and major properties are closing down weekly.

Kenya and Tanzania’s white sand coral coast is also one of the most pristine in the world. Yes it is suffering the same coral destruction that climate change has foisted on the oceans around the world, but it’s better here, for example, than in most of East Asia.

What’s going on? Should you go?

Well, that’s the problem. Every western government in the world, plus Australia, says, ‘No, you shouldn’t go’ because of potential terrorism.

The northern border of this paradise is Somalia, and real trouble began there when the U.S. invaded Afghanistan in 2002 sending all its most vicious criminals into Somalia.

Things weren’t so bad in the beginning, because it seemed like all the bad stuff happening in Somalia was staying in Somalia.

But then there was the election debacle of 2007 in Kenya with widespread violence that took nearly a half year to settle down. When it finally did, the U.S. began drone strikes in Somalia.

Then in 2011 Kenya, acting as a proxy for Obama’s growing wars against fleeing terrorists, invaded Somalia and all bets for a stable coastal tourism industry were off.

More drones killed more Arabs from Dar to Lamu, internecine warfare among the Arab sects in the coast heated up, prominent Arab leaders were assassinated in Mombasa and Zanzibar, and if ever there had been a stirred up cauldron of discontent and chaos, it was the East African coast.

Didn’t somebody say on TV this weekend that we’ve learned an important lesson from Baltimore? Didn’t someone say that we’ve got to do something more than just add police to stem crime?

Is that why Secretary Kerry is in Kenya, today:

to “discuss ways to more effectively deal with threats posed by the militant group al-Shabab”?

To get permission to fire more drones? To give Kenya more personal armored vehicles?

There haven’t been any serious terrorist incidents for months on the coast. (The Garissa University attack was considerably inland, far from tourist areas.)

But that’s the Catch-22: bring in more tourists and that will attract more terrorists, because terrorist attacks on tourists are always more powerful than local attacks.

I wonder if there were any businessman who invested in Belfast apartments in the late 80s? If so they’re making a killing, today.