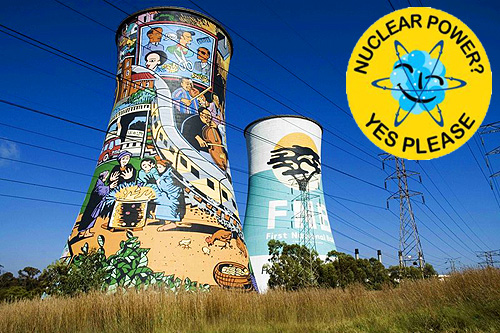 Worried about Iran’s nuclear power plants? How about Nigeria’s?

I think America’s frantic concern of Iran’s nuclear capability is linked to two irrational fears: that Israel is threatened by Iran and to the even more irrational fear of nuclear power itself.

Let’s calm down and take a look at the African experience, and maybe begin to see modern nuclear power as ordinary and necessary.

Large uranium deposits in Namibia, Niger, Malawi and most recently Tanzania are attracting good amounts of foreign investment ever since raw uranium surged in price to more than $100/pound several years ago.

(Canada is the world’s main source of raw uranium with Australia a close second. But the four countries in Africa exceed both Canada and separately, Australia.)

But today’s market for uranium, the use by nuclear power plants, is concentrated in places like America and France. And yesterday uranium’s spot price fell below $35/pound.

As an index as to how Americans and others in the developed world feel about nuclear power, the uranium spot market is excellent. The fact it sits at about a third of what it once was is a clear statement that there is only a third as much support for nuclear power today as only five years ago.

Until Three Mile Island, Chernobyl and Fukishima there was only minor although very vocal resistance to nuclear power reactors.

But each one of these events garnered more public antipathy to the idea, and for some anti-nuclear activists, Fukishima was the nail in the coffin for further nuclear energy development in the west.

Personally, I think this is terribly short-sighted. When time allows us to quantify the human and economic damage of those three major accidents compared with the same for the extraordinary emissions of coal-fueled power plants, I doubt there will be much of a contest.

But meanwhile, “.. almost all [African uranium mining] projects have been on hold since the collapse in prices that followed Japan’s Fukushima nuclear power plant disaster.”

African officials remain optimistic. One South African called nuclear power “inevitable” this week in an on-going dialogue within Africa that riases this whole topic onto a completely new level: perhaps Africa should use the uranium for itself. Like Iran.

South Africa has had nuclear power since probably the 1980s, and four new nuclear power plants are planned to go online by 2020 or so, with additional plants under study.

Note that South Africa remains a leader in new coal technology, and that there is a vocal minority among South African leaders against nuclear power.

There’s lots of coal in South Africa and throughout the whole of the continent. Right now almost 90% of South Africa’s power comes from coal, but even post-Fukishima there’s a growing sensitivity to carbon emissions, and more importantly, just the long-term costs.

Minister of Public Enterprises Malusi Gigaba told a group in Cape Town this year that the South African government believes that the cost of nuclear electrical power eventually “evens itself out” especially when set against carbon emission savings.

I think what we have to learn from South Africa in particular is that the fear of nuclear power is very introspective, and that when more properly considered in the framework of a greater society, there really is no alternative.

South Africa is head and shoulders in development above the rest of Africa, but it is still Africa. Its public needs are far more desperate than in the developed world. That mix of development with desperation for minimum standards is exactly the right social culture in which to best weigh the good and bad of nuclear power development.

Africans throughout the continent are realizing this. And since they sit on most of the raw material needed for this power it’s not irrational to imagine a world a century from now where the center of global power, literally and figuratively, is in Africa.

A century is a long time. But Africans are already anticipating the day. The best, most completely and sometimes most daunting detail of how the world thinks about nuclear power is compiled and published in Cape Town.

So while the developed world, which is comfortable enough to believe its myths and run from its fears and still have a good meal and nice bed to go to sleep on every night may criticize nuclear energy, the developed world is moving right along.

And if America or China or Britain don’t want Niger’s uranium, well gosh, maybe Niger will just use it itself.

Although it has not yet moved beyond grand announcement, Nigeria of all countries says that Russia is ready to build a nuclear power plant there.

Nor is it surprising that four of the world’s leading scientists on climate change would mount a huge PR campaign this week to promote nuclear power.

Africa is already over Fukishima. The disaster there pales in comparison to the disaster that might just be ending after 53 years in The Congo.

I see the current dip in uranium prices an opportunity for all sorts of good investing. Let’s just hope the developed world gets some of it.