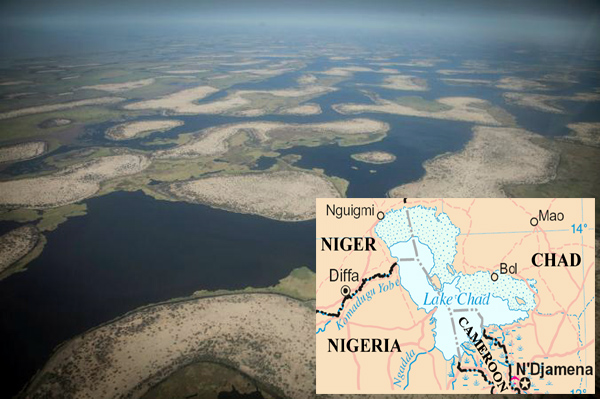 Several generations ago five million people depended upon Lake Chad in central Africa for food and work. It was Africa’s fourth largest lake, the size of New Jersey, with bountiful fish and plenty of water for irrigated farming. Today the lake is one-tenth that size and supports 45 million people.

Equal assaults on the lake by climate change and overuse portend a day soon when it will all be sand. The run-up to that could be quick, a year or less, and the human catastrophe would be unprecedented like a nuclear attack on Japan.

Great lakes in Africa surrounded by semi-arid country or even desert are common. Lake Turkana in northern Kenya is the size of Lake Michigan. There are at least three sizable lakes in Mali (Débo, Sélingué and Manantali) and perhaps the most known of all to foreigners is Lake Etosha in Namibia.

All these are remnants of a very distant, verdant Africa, when it was literally all jungle or water. That was 65 million years ago. There weren’t even humans, then. But the relentless process of the growing desert begun by the dinosaur meteor and followed by consequential ice ages took Africa’s jungles away and gave it the Sahara.

But that took an awful long time, millions and millions of years.

What happened to Lake Chad in the last half century was caused by climate change, global warming. It didn’t help that the terrorist insurgency in eastern Nigeria created hundreds of thousands of refugees that fled to the lake.

Many, though, like myself in my novel, Chasm Gorge, believe that this century’s terrorist was produced in significant part by last century’s climate change.

The speed with which Lake Chad is shrinking has provoked a most unusual human response: Fill it back up.

Nigeria is the central actor in this ersatz Mother Nature.

Nigeria has the most to lose among the other countries that border the lake: Chad, Niger and the Cameroon. It is by far the most developed and modern. Its agricultural industry desperately needs water from the lake.

Nigeria is also the home to Boko-Haram, the terrorist group that from time to time has controlled almost a third of the country and which sends the refugees fleeing east to the lake. Whoa to the disco clubs in Lagos if all those refugees had to flee south and west instead.

“The plan” follows an old Libyan plan which used massive pipelines to transfer water into the desert for agriculture. Nigeria estimates it will cost $14.2 billion dollars. That’s roughly half the government’s annual budget. It would be as if America were undertaking a project that cost $2 trillion.

Which we might end up doing if we keep ignoring climate change.

“It is obvious that the Lake Chad calamity did not just creep up on everybody,” a writer for the Nigerian magazine Punch charged. “Both the LCBC [Lake Chad Basin Commission] and the international community watched, perhaps unconcernedly, as the place described by Buhari as an oasis in the desert gradually deteriorated to its present state.”

How many Americans are watching Phoenix today? How many of those Americans will let their momentary surprise evaporate?

The pipeline would come from The Congo, which at least today has more water than it needs. It is the last true jungle of Africa. The idea might be scientifically plausible, but the people and insurgents who rule The Congo probably haven’t been consulted. They generally don’t listen to news. There’s too much gunfire.

“It’s a ridiculous plan and it will never happen,” the BBC concluded earlier this year, paraphrasing the movers and shakers of the region. Ridiculous perhaps, but now being considered at the highest levels of government. Policy is often a negative game. Do what hurts the least.

Everyone recognizes the urgency. A NatGeo writer following worried fisherpersons on the lake wrote:

“With the smell of the catch still in the air, the women turn their backs to the lake and begin walking inland. Within only a few hundred feet the lush plants give way to sand. Suddenly and dramatically, the women are encircled by the Sahel, the zone of transition before the Sahara desert begins, the sand rising to their ankles.”