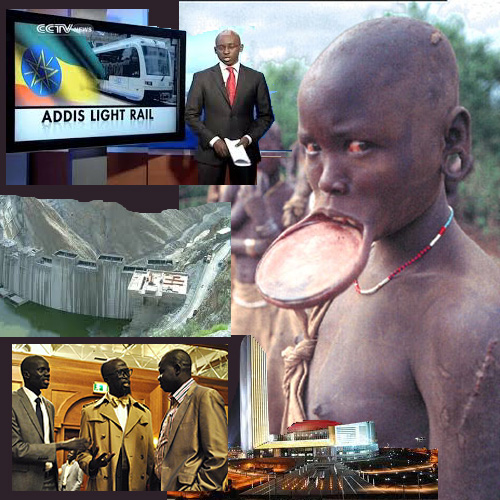 How fast and hard is ancient Africa falling? Take a look at Ethiopia.

Ethiopia is the only country in the entire continent of Africa that was never colonized. It was occupied for almost three years by Mussolini during World War II, but save that short episode it has had an indigenous rule since prehistoric times.

In fact, there may be few other societies in the world except parts of China and Japan where this is the case.

Geography is the main reason. The country is bordered by seas, deserts and mountains, effectively walling it from the outer world. This safety and isolation has led to a fascinating indigenous language, musical scale, methods of counting and cultural foundation unlike anything else in the world.

Only Christianity was able to penetrate the closed Ethiopian society, and because it was done so early, Judaism as well worked itself into ancient practices.

The isolation kept Ethiopia ancient throughout most of my life time. But that’s changing, and now changing fast.

And when any society changes as fast as Ethiopia is, there’s turbulence, and given where it’s headed to where it’s been, it’s mind blowing.

The violence of the overthrow of Haile Selassie was unbelievable. The Reign of Terror which followed was one of the most brutal regimes in contemporary history, and the wars with Eritrea and minuscule moves towards democracy have been agonizing.

There is only one opposition member of Parliament. There are more local journalists in prison than publish each day in Addis. The current prime minister, Hailemariam Desalegn, succeeded Meles Zenawi who was in power since 1995 until his death in 2012, and between the two of them they have constructed the most powerful totalitarianism in modern times.

The centerpiece of the country’s modernization policy is the ironically named “villagization” of the country, which Human Rights Watch calls “Waiting for Death.” Through massive relocation of its peoples, Ethiopian planners expect to create a more workable, productive society.

“Modern Ethiopia is a paradox,” writes David Smith in London’s Guardian newspaper this weekend. Smith is amazed that only a generation after the famine that killed more than a million people, Ethiopia is now hailed “as an African lion because of stellar economic growth and a burgeoning middle class.”

More millionaires are being created in Ethiopia annually than anywhere else in Africa. Addis Ababa, once a quaint and isolated capital known mostly for its antique silver jewelry, has today skylines with Chinese office skyscrapers and modern highways.

Advancements in agriculture developed here may actually be winning the war against desertification and prompted the IMF and World Bank to underwrite what will become Africa’s largest dam.

The scale of this dam and other feeder dams is destined to produce more electrical power in Ethiopia than exists today in all of sub-Saharan Africa down to South Africa.

And all of this rapid modernization forged by an incredibly repressive government threatens to ignore to the point of not preserving many of the beautiful and unique practices of the ancient world.

I recall traveling to a remote region of Ethiopia in the late 1970s to visit the Mursi people, and I continue to refer to that trip as one of the last I ever made where I felt I truly saw Africa in prehistoric times.

“They know that they are practically finished”, William Davidson of Think Africa Press says regarding the Mursi today.

“Their way of life, their livelihood, their culture, their identity, their values, their religious beliefs – all this is being rubbished by a government which sees them as ‘backwards’ and uncivilised.”

There’s nothing wrong with modernizing Africa. But boosting the speed of development at the expense of human rights is wrong. And doing it so fast that valuable connections with the past are lost forever isn’t particularly enticing either.

What’s the point in farming better turkeys if done at the expense of celebrating Thanksgiving?