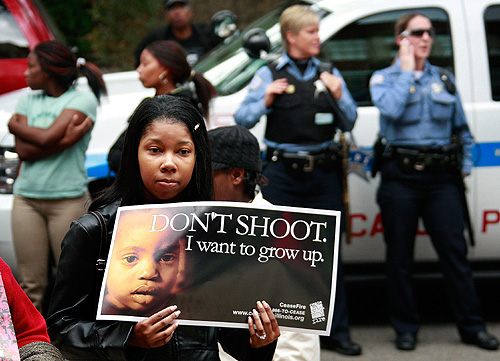 Coastal Kenya, Chicago and Arusha suffered terrible acts of violence these past several days, and it leaves us wondering if it’s safe to walk out of the house.

The violence along Kenya’s coast just seems to get worse and worse. Although 28 of the 29 deaths this past weekend occurred outside established tourist areas, one fatality was a Russian tourist in Mombasa town who resisted an attempt to rob him of his wallet.

In Arusha, the hub for Tanzania’s famous tourist industry, a third violent attack this year happened Monday night when an IED was thrown into a popular Indian restaurant in the center of town.

No one was killed but eight people were hurt. The Verma Indian restaurant is attached to a popular city gym and is frequented by Arusha’s more affluent residents, including many foreigners.

In Chicago 16 people were killed and 80 others seriously wounded in gun battles that raged through the city’s south side for most of the weekend.

What are we to make of all this?

The Kenya violence is a continuation of the Muslim/Christian world war, a specific retribution by al-Shabaab for Kenyan occupation of Somalia.

Kenya has suffered three such attacks monthly for more than the last year alone. The Kenyan invasion, encouraged and outfitted by the Obama administration, has done much to pacify Somalia and reduce the terrorism threat to the United States, but at Kenya’s peril.

In Chicago the violence strikes me as a result of increasingly lax gun ownership restrictions. Chicago’s top cop said this to CNN. Of course why there is such anger and frustration that utilizes the available guns is the more profound question, and unlike Africa, it isn’t a Muslim/Christian war.

It’s more akin to a poor/rich war, which in fact could be the explanation for the Arusha bombing last night.

Tanzania has not participated in the war in Somalia, and so unlike Kenya and Uganda which have, Muslim groups have not claimed any responsibility for attacks seen on the Tanzanian mainland.

But the three attacks in Arusha over the past year have been political or religious. A prominent and popular Arusha politician and his wife were hurt at a political rally, and a Catholic church was bombed in a second attack.

Monday’s attack in Arusha targeted what’s considered an expensive restaurant, owned by Indians, in one of the city’s most affluent neighborhoods. Throughout the last several centuries Indians in Africa have often been the brunt of attacks against political systems that favor business and the rich.

This suggests three completely different motivations for the violence in Arusha over the last year.

In the end, the simplest explanation for all the attacks is that weapons are too easily available. The next level of explanation is that identifiable groups of people feel marginalized:

I disagree. There are not enough poor in Sweden or Denmark or many, many European countries for there to be a problem of rich vs. poor in those countries.

Recent progress in Ireland proves that enmity between religions isn’t eternal. And even when some friction continues, as in Quebec, it rarely if ever becomes violent.

But taking a vacation is different from social activism. I’ve said for some time, now, that I feel the danger to vacationers in Kenya has broken at least the threshold of perception of visitors’ safety, so I can’t recommend traveling there for most people.

But to Chicago or Arusha it’s simply a matter of knowing where and where not to go. Don’t visit Chicago’s south side. Don’t eat in a downtown Arusha restaurant. Those are fairly simple tools for staying as safe as one has ever been.

The point is that this violence so far has not been random: The perpetrators are motivated by ideology, and their footprints are clearly tracked.

Visitors are not the intended targets. Only in Kenya is the violence so widespread that visitors have in fact been victims and this specifically because the focus of much of Kenya’s tourism is the coast where the religious conflict is centered.

There is still good news and bad news, and this is the bad news, today.