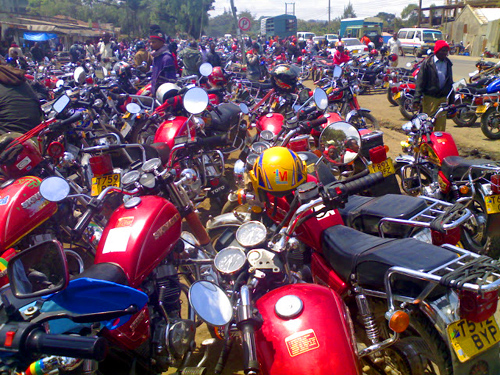 BodaBoda means Harley in Swahili and may represent the next East African revolution.

So let me start by saying some of my best friends own Harleys… or did. One of them turned his in for a Kawasaki. And then there’s my niece living in Milwaukee who has managed to grow her business by selling leather items to Harley owners. And good grief, EWT has even operated safaris for Harley packs traveling from Cape to Cairo! 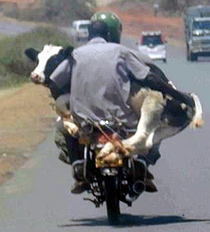 Kidding aside, the opprobriums attributed Harley owners have more or less died down in my generation. But there was certainly a time when Harley gangs slipped out of James Dean’ book clubs into brigand suburban warfare.

And that’s what’s happening in much of East Africa, today.

Motorcycle use has exploded in East Africa’s cities in just the last few years and the backlash from the ruling classes — all of whom own Mercedes — is astounding.

The menace is called BodaBoda, a Swahili nickname derived from ages ago when small motorcycles were used to ferry travelers between BORDER posts. 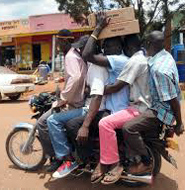 Often buses taking travelers from a city in one country to a city in another country were unable to cross the border. So these entrepreneurial motorcycle owners would ferry passengers from a bus on one side of the border to a bus on the other side. 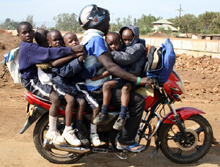 In the safari business we’re now constrained by rush hour. Entire itineraries are designed to allow transit through a city on a Sunday, about the only day that road rage can be avoided.

But local citizens have to deal with this every day, and the fix for the last several years has been to dump your car and get a BodaBoda, instead.

BodaBodas believe they are subject to no laws. So despite the rapid installations of traffic signals in places like Arusha, Tanzania, it matters little to them what color is showing above. 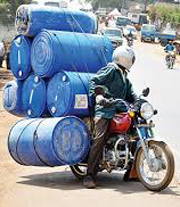 They slip through the narrow spaces between miles of stopped traffic.

They make roads wherever they want to. Smaller BodaBodas roar right down the aisles of grocery stores.

As this culture of initial efficiency prevailed a darker side emerged. Police still use cars. Robberies, homicides and all manners of crime are now principally conducted from BodaBodas.

“Boda boda which have brought relief to commuters in poorly accessed suburbs of Arusha have of late been blamed as being behind a series of violent crimes,” writes Arusha’s main newspaper last week.

A third of all road fatalities in Tanzania are now BodaBoda drivers.

The Kenyan Upper Class is being rattled. Recently the government announced a number of dramatic “remedies” to the BodaBoda menace:

(1) All women will have to sit side straddle, as proper English did in Victorian times. A woman Kenyan legislator, Caroline Owen, explained that the standard BodaBoda straddle of a bike “was uncultured and deprived women of respect because they expose their bodies to men.” 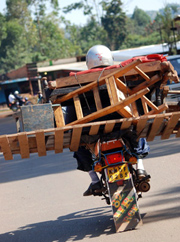 (2) No BodaBodas will be allowed in Kenyan city centers. Moreover, elsewhere they can’t operate between 11 p.m. and 5 a.m.

(3) Only one passenger besides the driver can be on the BodaBoda at any one time.

Fat Chance. If Kenyan authorities think there’s a security threat from neighboring Somali terrorists, just wait for the BodaBoda to Rise Up. And if road construction isn’t sped up quickly enough, they’ll be plenty of BodaBoda traveling on a single wheel, anyway.