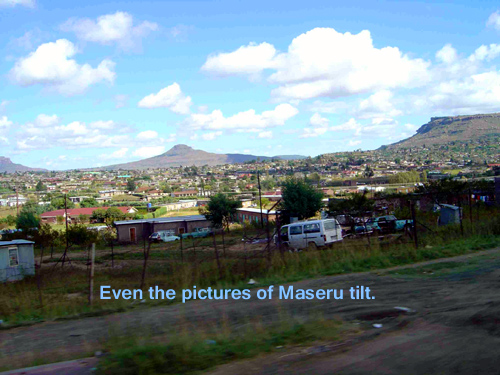 Lesotho is a spot of a country surrounded by South Africa. Is it time to wipe the spot out?

In fact, there are 110 of the 252 countries listed by the U.S. WorldFact book smaller than Lesotho.

South Africa’s other spot, Swaziland, is only half Lesotho’s size. So why am I asking if it’s time to wipe out Lesotho?

Most of the spot countries of the world are either too anemic or too essential to mess with: the Seychelles and Singapore, for instance. Few will protest when most of the Seychelles tiny 90 granite islands sink as the world’s ocean’s rise.

But a lot of Asian billionaires and world banks will tremble if Singapore cracks.

Some creative accounting is possible for trucking companies depending upon what particularly taxed goods they’re carrying.

In the old days during the very strict moral laws of apartheid in South Africa, Swaziland was the playground of the debauched with lots of casinos and gentlemen’s clubs. Today’s South African laws are less restrictive, but still more restrictive than the g-string thresholds in Swaziland.

These aren’t all necessarily good reasons for Swaziland to exist, but they are reasons. That’s Lesotho’s problem. It doesn’t have any reasons to exist.

The reason Lesotho is Lesotho, and Swaziland is Swaziland, and neither is a part of South Africa starts with their geography. But Lesotho is surrounded by South Africa. Unlike Swaziland’s geographical situational raison d’etre, Lesotho was left alone because it was too high to get to.

Lesotho is almost entirely above the clouds. It has the highest lowest point of any country in the world, 4,593 feet. The rest of it scraggles upwards to a peak of 11,424 feet high. It’s mostly gravel, limestone and granite mountaintops, with a very few meadows that some unusual sheep live in, and one tiny city, the capital of Maseru, that if lifted down to a reasonable altitude would look something like a sprawling mobile home community near Flagstaff.

There are less than two million people widely scattered among its nooks and crags with a third of the resident population unemployed and the rest, two-thirds, all working for the government.

There are no natural resources, and the country only produces 20% of its food. In fact, Lesotho imports 90% of everything it uses.

Essentially all of its wealth comes from its citizens working in South Africa and sending the money home.

This was all honky dory for the two entities, Lesotho and South Africa, for years. Rather than undertake this extremely undeveloped region that needs so much expensive infrastructure, South Africa preferred to let Lesothoans work in South Africa and avoid many of South African taxes, so that the money could flow up to the mountain tops and keep everybody peaceful and quiet.

They aren’t peaceful and quiet, anymore.

People grow up. They get educated. They learn when they’ve got a raw deal, and technically South Africa has maintained Lesotho as a kingdom to save money.

Several years ago revolution erupted. Basically that meant that the 57-member military/police force took over the palace then the legislature.

South Africa mediated a solution that gave more power to the people. But then only a few weeks ago, baton wielding coupest turned into gun firing takeoverists.

What Lesothoans want is to become absorbed by South Africa. Most outsiders don’t realize this. Like Thomas Friedman, they think that all Lesotho needs are few new restaurants.

This has been going on too long, now. In a country with only 2 million people, 30,000 signed a petition then staged a march in Maseru four years ago demanding annexation by South Africa.

When nobody listened, the men with batons hit the street, and now, men with guns are taking over. What had been a peaceful if placated democracy is now another African dictatorship.

“In reality, Lesotho is in the Free State and so it can be an extension of the Free State, or the 10th province,” one of South Africa’s principal union leaders, Frans Baleni, said last week.

He’s absolutely right. It’s time to wipe out the spot.