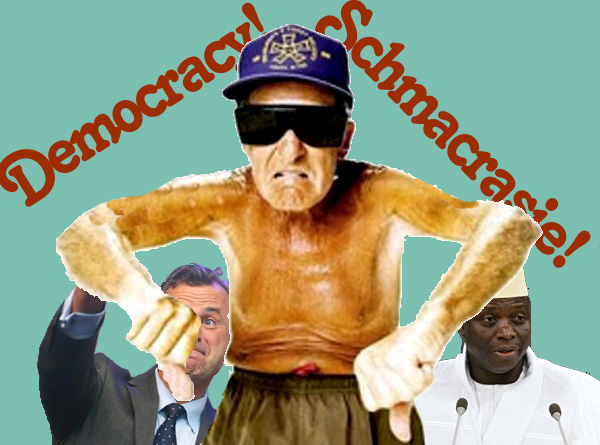 Is it a glimmer of hope or a foggy masquerade? Weekend elections in Europe and Africa suggest the former, but really, is the conservative populist movement terrifying the world coming to such a quick end?

The expected winners of Austria and The Gambia’s presidential elections, both die-hard if ruthless populists, were soundly defeated. Look to Africa for the greater meaning.

For certain, polling worldwide doesn’t work, anymore. That doesn’t mean you should just “forget about the predictions” because the predictions will tell you something very important.

The presumed nail-biting election between youthful, charismatic neo-Nazi Nobert Hofer in Austria and his grandfatherly old socialist opponent, Alexander Van der Bellen was anything but: grandpa trounced the kid.

Same in The Gambia. BBC to al-Jazeera headlines included “shock” to describe the decisive electoral ouster of the old dictator, Yahya Jammeh.

For the 22 years since Jammeh came to power in a coup he was untouchable. He routinely ran showboat elections that he always won by huge margins. He held the country by its jugular controlling the media, the schools, most of its commerce and in fact forbid outside observers and media.

“Polling” proudly insisted that its ‘scientific’ ability to weigh such advantages definitively showed that Jammeh would win, again. But young Adam Barrow, whose first job was a security guard in London, ousted the Gambian strongman by an unexpectedly large margin.

Wild celebrations continue in the capital Banjul, today. The old dictator leaves his security apparatus and most of the country’s powerful players in a daze. According to the Financial Times this morning, the victorious Adam Barrow seems to be hiding!

What happened in The Gambia was a “reversal.” The electorate had no opportunity to learn about the opposition candidate, since Jammeh refused to afford him any way of doing so. He seems mildly progressive, talks about increasing factories around the country, but really we have no idea who he is or how he’ll govern.

So when the people voted for Barrow all they knew for certain was that they were voting against Jammeh.

In Austria the election was a re-run of an equally surprising election last May that was deemed too close to call. Austrians weren’t manifesting right-leaning or left-leaning inclinations with their vote, but rather contrarism. They just wanted to defy the media and experts all who were presuming the neo-Nazi would easily win because of Trump’s win.

I think contrarism also explains the defeat of the Italian referendum and even the election of the Uzbekistan president.

This week Africa will tell the story once again, with a very contentious election Wednesday in Ghana. Ghana was where democracy began in Africa in 1952. It has been a peaceful, generally progressive country for all the years since, with an economy that constantly tops the list of African performance.

While it may be hard to read Ghanian tea leaves, I don’t think so, so check me out: The two contestants are both well-known figures in the country, the current president seeking re-election, and the leader of the opposition making his third try for the office.

For Africa things are going pretty well in Ghana, but the populace is frustrated. A nagging problem that besets all of Africa because of the abrupt end to the colonial era is frequent electricity outages. “Dumsors” as Ghanians refer to them.

Whoever has political power is blamed for no electricity power. The conventional reasoning is that the party in power has two chances to fix it, then they’re out. That’s been the pattern.

So – you think – the opposition wins, right? No, you’re wrong. Not this time. An expression of “NO” or contrarism is to defy conventional wisdom. I think the current president will win an unprecedented third term.

What’s happening worldwide is that people are voting NO. Whatever is presumed, polled, ‘scientifically determined’ will be reversed. It isn’t because every voter is reading every poll or listening to every pundit. It’s that every poll and every pundit is a part of the status quo, and voting contrary to convention wisdom is the perfect way for the electorate to express very deep dissatisfaction with the status quo.

As a result all that we can be sure about is that the populace will try again and again to change the status quo. Traditionally – conventionally in Africa once a dictator got in power he stayed until he died, but no longer:

“The club of dictators will be losing more than a bit of sleep in the next few months,” one of Kenya’s main commentators said today.