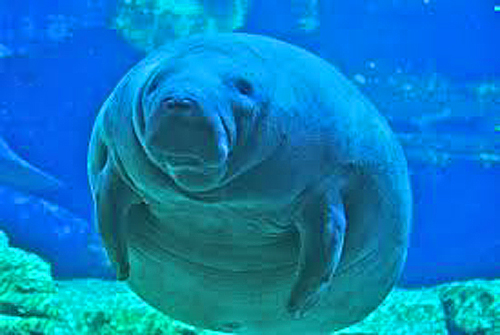 Some very deep West African superstitions may be the last great barrier and yet also the last great hope for saving the rare African manatee, a creature on the brink of extinction.

The manatee and elephant share a common ancestor they evolved from about 100 million years ago. Their evolutionary story is pretty well known, but unlike the South American (Trichechus inunguis) and West Indian (T. manatus) cousins, the West African manatee (T. senegalensis) has only recently attracted conservation efforts. In part this is because so little was known about the animal and some scientists had long ago thought it extinct.

The South American manatee lives in fresh water; the other two in salt water, and it’s the West African manatee’s habitat mostly among coastal mangrove swamps and inland marshes that so threatens it.

All three types are slow moving and big, so easily hunted. They feed on certain vegetation also preferred by a number of other marine species that are widely harvested for food, so are usually considered competitors with local fishermen.

For the last seven years saving the West African manatee has been led by a single woman, Lucy Keith Diagne, born, raised and educated in Florida among the State’s prized marine mammal.

It’s been an uphill battle for Lucy, particularly because much of the manatee’s West African range extends into politically troubled areas.

Lucy and others have discovered, though, that the population might be protected at a critical bottom level by local superstitions.

West African spirit beliefs and myths are still very powerful forces in most rural cultures. In ancient times they provided the basic beliefs to all the early societies along the Niger River, which became the basis of Brazilian voodoo, for instance.

So while war is the most formidable obstacle to researching and protecting a wild animal, Lucy discovered that superstition might be, too, but in a surprisingly positive way.

“Mami Wata” is a complex female spirit in West Africa that remains powerful throughout much of the manatee’s range, and frankly, the manatee looks a lot like what I would imagine Mami Wata to be!

Mostly positive and protective, Mami Wata can nevertheless be angered and raised into terribly destructive engagements with people, cursing them to death. For this reason she is mostly left alone and intentionally ignored.

In many parts of rural West Africa it’s presumed the only people who dare to engage Mami Wata are fugitives, renegades and show-offs who usually meet a dire fate.

For this reason, few in these rural areas of West Africa will help researchers locate much less study a manatee, but at the same time the attitude affords a natural protection for the animal.

It will be a long time before this barrier to greater understanding might be developed into sustainable conservation the way Florida has. Manatee in Florida are most often associated with Disneyland and other family fun vacations where certain attractions advertise swimming among them.

They are gentle if bumptious creatures, sometimes called underwater Teddy Bears. In the numerous places in Florida and the West Indies where they’ve been habituated to human swimmers, they are curious enough to produce exciting encounters, but too slow moving to be considered anything but gentle despite their size.

Declining populations in Florida and the West Indies were turned around by making the animal a tourist attraction rather than a hunted animal. The State of Florida designated the manatee as its state marine animal in 1975 and since then a number of programs have so well protected them that the population is now stable.

But it will be a long time before traditions change enough in West Africa that an estuary owner will agree to bring tourists into his pond to swim with Mami Wata.

But that may also be the reason Mami Wata still exists.