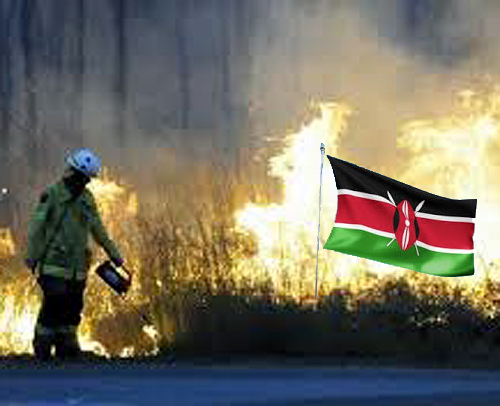 Kenya didn’t deserve this, but as America’s proxy in the war against terror in Africa, it was all but inevitable. This is Kenya’s 9/11.

It didn’t have to be this way. Until little more than a year ago, Kenya stayed out of the fray between terrorists and The West that was combating them worldwide. With the greatest terrorist state to its side, Somalia, it managed peaceful coexistence.

Not that it was easy. The massive Dadaab refugee camp on the border with Somalia was numbered in fractions of a million people and was putting enormous strains on the Kenyan economy and security forces.

Home grown sympathizers of the Somalia terrorists, particularly in the heavily Muslim coastal areas of Kenya, had carried out small grenade attacks and kidnapings, several of tourists.

But compared to the steady and growing breadth and scale of terrorism throughout the country all this year, culminating with Saturday’s attack on the Westgate Mall, it was almost par for the course in the age of world terrorism.

What changed a year ago?

It is widely called the Kenyan invasion of Somalia, and Kenyan troops remain in Somalia having successfully ousted al-Shabaab from power. But it is more accurately America and France’s war, using Kenya as our proxy.

And I don’t mean only ideologically or symbolically. If you’ve read my blogs since the October, 2011, invasion, you’ll have followed the growing presence of American troops and advisors, the large number of drones and the many French warships in the area.

This is all going to plan. And the plan, Obama’s and Hollande’s, was to make the west and their own countries in particular, safer. And they’ve done that.

At the expense of Kenya.

I am an American with my past and part of my soul in Kenya. Do I feel safer? As an American, yes.

But Kenyans have taken the hit, so that we Americans didn’t. And the garbage we heard this weekend from the hate-mongers in Congress and the T-Party people like Steve King of Iowa, make my blood boil. They are so intensely ignorant of the facts, and so wholly unsympathetic to misery, I’m not sure what those of us with reasonable minds can possibly do.

Kenya had been dealing with terrorism – as painful as it was – in a much more correct way until America and France got heavily involved in the last several years. Now, like America in the aftermath of 9/11, Kenya has no choice but to increase the fight they didn’t start.

And that will intensify the battle in Kenya even as worldwide terror diminishes painfully slowly.

It is so sad and such a replay of history. The age of slavery, the period of colonialism which followed and the subsequent Cold War dependencies foisted on new African states … all of these seemingly endless periods of African misery enormously benefitted the developed world with little regards for the African human being.

And so it happens, again.

Terrorism against America and France is much diminished for all sorts of reasons, but in very large part because we’ve found a way to keep it keep it far from our shores. Obama may be ending America’s great fires of war, but he’s done so in part by starting back fires.

If the Kenyan gate burns down, the fire comes home. So don’t worry, Kenya, we’ll be sure to help… you burn some more.