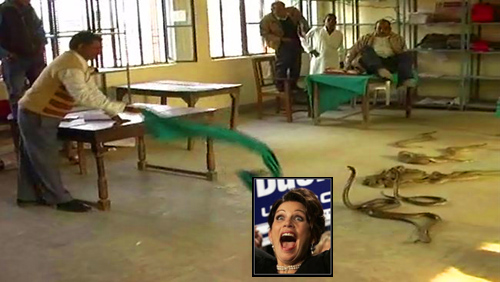 I have not taken the event more out of context than most T-Party dialogues. The perpetrator was actually protesting a new Indian regulation outlawing traditional snake charmers. And I have no doubt south Georgia T-Partyers will spin this to their warped intellects.

It was only last month that a 22-year old tried to illegally buy a black mamba in the woods of southern Georgia at 2:30 in the morning. Obviously frustrated that he couldn’t find one on Amazon.com he nevertheless found a ready seller. Must happen all the time, but we found out about this one, because the kid got bit.

We’ll never know for sure if he was always a redneck, but he absolutely was when medivaced to a Jacksonville hospital. His life was saved. The snake is loose.

A half dozen times annually some idiot in the U.S. breaks a battery of laws buying or selling an African mamba. For the life of me I can’t figure out why. What kind of imbecile wants to keep such a killer?

Mambas don’t make good pets. I know. I had to sweep them out of my house at the start of the first rains or risk being swept into the next world. I have a hard time understanding people who keep non-venomous snakes as pets, but good grief, why would you want a killer?

Has to be a macho thing. Unless you think you could create a seemingly serendipitous moment serving Assam tea cakes at an afternoon guild party to knock off a maiden aunt. Why else?

Mostly a macho thing. I’ve known several wonderful reptile scientists in my life, and by the time they become real worthy herpetologists, they were no longer macho-driven, but as kids, that’s usually what motivated them. Dares to do-s.

And then there’s the whole matter of it being illegal. You cannot own, sell or buy an African mamba, green or black, in the U.S. without a permit generally reserved for zoos and medical research facilities. So this dare gets even more thrilling, because it’s illegal.

Florida is running amok with killer snakes from Africa because of imbeciles playing God.