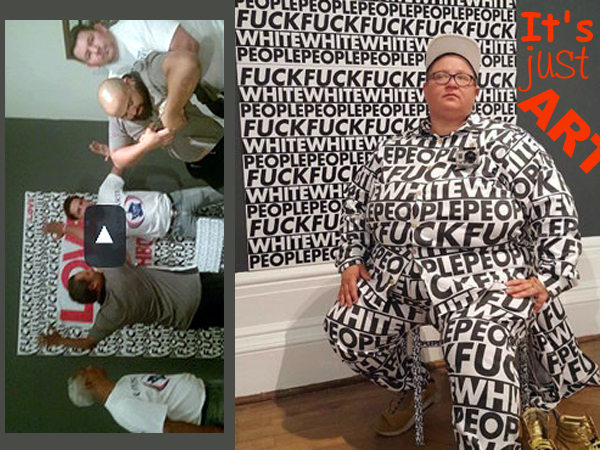 Can a piece of art be hate speech? A year-long furor in South Africa blew up yesterday when a gang of white men calmly entered Cape Town’s prestigious National Art Museum and plastered a large sticker reading “Love Thy Neighbour” over a “F**k White People” pop-art canvas.

The controversy actually began a year ago when a student at Wits University wrote, “I honestly don’t like white people; I have every reason not to” and walked onto campus then into class wearing a T-shirt that said “F**k White People.”

No disciplinary action was taken against the student but it provoked quite a lengthy discussion across the country.

As the issue died down, one commentator summed it up: “The t-shirt is offensive, but so are many other things. It’s hardly reconciliatory, but then so what? Surely we don’t live in a country where being offensive is wrong?”

Well, guess what. The issue didn’t die down.

Last week the National Gallery renewed the debate by prominently displaying white artist Dean Hutton’s canvass and even more provocatively, invited him to sit next to it in his own more intricately created “F**k White People” outfit. Hutton is a big man. It took a lot of repetitions of the phrase to fill his surface area.

The gang claiming to be members of the “Cape Party” were completely above board and despite some of the still photos being circulated, not really very violent.

They approached museum employees and let them know their intentions, then started to cover the canvas with a large sticker reading, “Love Thy Neighbour.”

When two employees tried to intervene, gang members held them back but not particularly violently.

A video was taken of the incident and gang leader, Jack Miller, is heard telling employees trying to remove the sticker after it was plastered over the canvass, “You can either damage it more now or leave it and contact the artist.”

Vigilantes by definition are law-breakers: All citizens can litigate remedies to laws they believe are being broken. On the other hand, “civil disobedience” comes in various degrees, so is this just appropriate civil disobedience? Civil disobedience is often used by those who contend they have exhausted all other realistic remedies to injustices against them.

Let’s clear the screen of those white thugs marauding the country’s main national art gallery and get down to the nitty gritty:

Should that canvass be displayed in the National Art Gallery? What’s its purpose, and does it break law?

Proponents of the piece, and defenders of last year’s T-Shirt incident, claim that it’s art expressing black pain. Those aggrieved have called it everything from “reverse racism” to abject violations of Section 16(2)(c) of the Constitution which prohibits “the advocacy of hatred based on race.”

My opinion is that this is art but poor art, reducing its true value to little more than provocation. Frankly I put it in the same category as all those horribly violent video games. It does nothing to advance either art or the topic it pitifully claims to address. Its only real value is a reaffirmation of freedom of speech, which is valid but in its provocative context kind of stinks.

But the action of the so-called Cape Party is actually worse. First, it gives the situation a much wider audience basically taunting the provocation, stoking the animosities. Second, the action was clearly illegal which third – in a weird kind of way – kind of validates the first provocation by that bad piece of art.

To call the vigilante’s stickering “civil disobedience” is like identifying a three-year old’s tantrum as reasonable discourse.

So basically it all stinks: the original “art” provocation and the reaction by a group of thugs. How pleasant are things going in your community today?