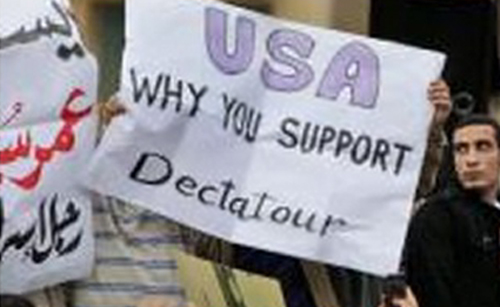 As Egypt’s struggles continue anti-American sentiment grows in places as far away and dear to me as Kenya. Some of this is envy of the powerful but some of it legitimately derides an unfair world order.

Yesterday a widely read blogger in Nairobi associated with one of its main talk radios warned Kenyans of “the rude awakening that has visited the people of Egypt” that their leaders have been “serving a foreign master’s agenda.”

And that master was, among a few others, America.

With bitterness that verged on vitriol, Solomon Gichira writes, “We all know one or two reasons as to why the world came running to our rescue after the 2007/8 election crisis… because they feared losing supplies from our flower or dairy industries among others. However, they will never package their interests that plainly.”

Gichira is referring to the massive intervention by mainly the U.S. and Britain following Kenya’s fraudulent 2007 elections. Led by Kofi Annan the international rescue of Kenya included more than $10 billion and supported first a power sharing deal between the two rival candidates for president and a range of incentives that led to Kenya’s new, excellent August 2010 constitution.

Gichira is dead wrong when he gets specific yet important because he represents a huge swath of public opinion in the educated developing world. Moreover, his general contention is right: world powers don’t do anything altruistically; it must be in self-interest.

U.K. and U.S. interests could care less if Manchester flower markets don’t have enough roses. A more important reason, “strategic interest” in polispeak, is Kenya’s geopolitical position in the war on terror. Kenya’s often superficially irritating actions in this regard, like allowing Omar al-Bashir into the country, detaining radical mullahs without trial, and letting military equipment sneak overland into the South Sudan, are all applauded silently in the halls of Westminster and Washington.

And Kenya’s overt actions with regards to the South Sudan and its constant border squabbles with whatever is left of Somali receive constant praise from the west.

These are the west’s true interests. But Gichira is right: it is an agenda dictated from abroad, one that is not necessarily wholly in Kenya’s interests.

Gichira’s account of the modern history of Egypt and its neighbors leaves something to be desired, but he basically underscores the botched handling of the “Jewish question” and the poor way that both Israel and subsequently Palestine were created by world powers. He rightly conveys in my opinion how Britain deftly relieved itself of Jewish prejudice by exporting it to the Middle East where it ferments worse today.

And he’s right on when berating Britain and France’s manipulation with the U.S. in the security council of the nascent Arab revolutions to overthrow potentates like Farouk, how this led to anti-American sentiment and Cold War support by Russia. That led, by the way, to those “revolutionary” regimes being subverted still again … just by the east, instead of the west.

So basically while I think like so many revolutionary enthusiasts Gichira misuses facts at his peril, his conclusions reflect the feelings of many of us progressives in the west: Developing world peoples have been mistreated mostly by being ignored, and when not ignored, by being used for “self-interest.”

The problem is that I don’t know how this could ever have been different. Big guys bully small guys. That’s our world order. And try as we do to elevate this morality, we just haven’t been able to yet.

“What is not told to the ordinary reader is that the Camp David agreement” Gichira writes “brought with it huge American goodies to the Egyptian leadership” including “financial and military support” and “America’s blind eye to oppression and suppression of any conscious or dissenting voices” in Egypt.

And so now for “the US and Tel Aviv administrations, the chicken have finally come to roost.”

Gichira now tells us that we will “painfully watch as you lose your Mubarak. Not to your well equipped American-Anglo-French-Jewish military muscle, but to the unarmed power of a dissenting population that has had enough of your meddling. At that point, you will remember that the silence Egyptians over these years of your misdeeds and myopic interest was not anything like an acceptance but a big lie.”

But what I do know now, thanks to the transparency and intellectual stimulation that gives rise to voices like Solomon Gichira, is that we can begin to act responsibly in a global way, right now. We can stop any overt or tacit support of the Mubarak regime. We can let the streets play out, because now, those Egyptians, like Gichira, are totally capable of handling their own affairs.

Let them come to power, and then let them deal with us. We, too, were once revolutionaries.