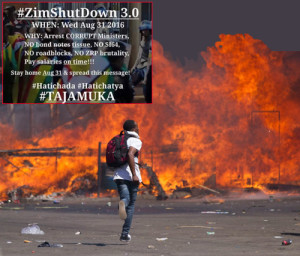 Demonstrations in Zimbabwe are increasing and the firestorm is building for tomorrow’s nationwide shutdown.

Canadian, American and British embassies in Harare have all issued notices of concern asking the Zimbabwe government to restrain its security forces. NGOs are universally condemning the fierce government reaction so far.

Saturday government security forces violently attacked a large and mostly peaceful protest in Harare that the Zimbabwean High Court had sanctioned, pitting the security forces against the country’s highest court.

Monday the newest leader of the developing protests, 31-year old Promise Mkwananzi, was denied bail following his arrest for leading that peaceful demonstration. Later Monday a spokesman for Mkwananzi called for widespread demonstrations Wednesday “to shut the country down.”

Earlier outside the court Mkwananzi said, “We are giving the government up to the 31 August 2016, for President Mugabe to either step down or indicate to the nation a timeline framework in as far as his vacation of the presidential office is concerned.”

He was speaking tongue-in-cheek of Mugabe’s hasty departure over the weekend. The 92-year old dictator flew out of the country after issuing a statement that anarchy and “Arab Springs” will be stopped. There has been some speculation he may not return if the demonstration tomorrow proves as large as organizers claim it will be.

Unlike similar histories of other toppled African dictators, Mugabe’s absence will not immediately alter the situation in the country very much. Although details are not known it’s understood that both the army and security forces have agreed on a succession.

The succession would be no more democratic than the current situation and could, in fact, garner even less support from the public. If that resulted in the army and security forces battling one another, then the country could spiral into complete chaos.

Over the many years of Zimbabwe’s autocratic regime, many different opposition groups have emerged, mostly to disappear after several years of failure. The largest and most durable is the Movement for Democratic Change, led by Morgan Tsvangirai.

After demonstrations in 2009 that nearly toppled the government following a flawed election, Tsvangirai was made Prime Minister. Although he served for four years, his power was continually eroded before losing the position in 2013.

Recently he told the BBC that he has cancer. His detractors in the opposition movement claim he was coopted by the Mugabe regime.

Mkwananzi is the newest of the potential new leaders for the country. Unlike old opposition leaders, he works entirely through social media. He founded #Tajamuka on twitter.

The Zimbabwean government has been actively trying to shut down social media, so new hashtags appear often. Despite new oppressive legislation, blocking data bundles from cell phones and amateurish attempts to disrupt WhatsApp, the government is losing this high tech battle.

Meanwhile tourists in Victoria Falls came under increased threats this weekend when police confronted a demonstration of whites protesting Mugabe. After several were arrested, one in the group made a point on social media to explain that they were, in fact, Zimbabweans and not tourists.

But the police are unlikely to be able to make that distinction. As a results tourists are being warned against going to Victoria Falls for the remainder of this week.

There are multiple indications that the government intends to suspend the constitution and declare a state of emergency.

A growing number of analysts in neighboring South Africa believe this may be a turning point in Mugabe’s long rule.

“This movement is different to earlier forms of civic activism,” professor Brian Raftopoulos of the University of the Western Cape told the Mail and Guardian, Monday. Raftopoulos says it is not driven by any single political party or movement, but seems to be an “upswell” of the entire country.

Few regimes in Africa – dictatorial or democratic – have been examined as closely for as many years as Zimbabwe, yet the end of the current oppressive era is bound to come in many forms as a surprise. With so much opposition so fractured for so long, so many in the regime entirely dependent upon it, the sudden absence of Mugabe will create a vacuum none of us can properly anticipate.