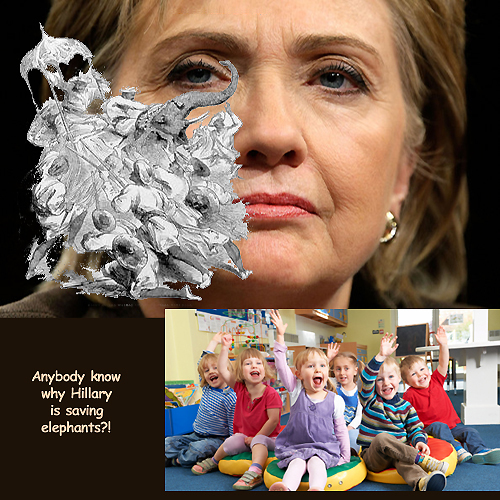 Yesterday in Australia she veered the topic away from the more weighty subject of Australia’s role in the world to antipoaching, as America’s acting ambassador in Nairobi opened a fat wallet to the Kenya Wildlife Service.

I think it all well and good that we Americans support Kenyan anti-poaching efforts instead of paying down the deficit or increasing funds for green energy.

No. And that’s not the point. Anti-poaching is not normally in the portfolio of America’s Secretary of State. Remember Hamas and Israel are bombing each other, Iran is boiling hot, and New York is floating away.

There’s more to Hillary’s campaign than to save animals.

In September the outstanding Africa correspondent for the New York Times in Africa, Jeffrey Gettleman, reported that terrorists on the run (probably from Obama’s special forces) were slaughtering animals and selling them for their operational funds.

Obama had earlier through the Dodd-Frank Act and other clever means dried up the main source of African terrorist funds: Those black dollar bills in the millions if not billions were amassed through Rwanda’s brokering of black market precious metals like coltan which Apple, Intel and Sony need to make things like Xbox, Droids and iPads.

Unable to sell coltan on the black market, more sophisticated terrorist groups started to call in the favors from the Rwandan government, that had depended upon their trouble-making in the DRC to complement their own draconian police measures at home against Hutus.

So the U.S. and France quietly started to squeeze Rwanda by unmasking its decade-old support for DRC terrorist groups as if it were news. It worked. New and sharper eyes from the United Nation began to monitor Rwanda in The Congo closely and after a few diplomatic swipes back and forth, Rwanda started to close the vaults.

Further afield funding for the central African terrorists was available from the big guys in Yemen and Somalia. More difficult but possible. Until Obama quietly nudged then aggressively supported the Kenyans who bombed the hell out of the banks (and everything else) in Kismayo until the city fell in October.

What’s left? Well, we had to get the election out of the way. And then:

China’s growing influence in Africa has been going on for nearly two decades, and right now there are Chinaman everywhere in Africa. They come to build roads and dams, to manage hydroelectric plants and all to help China get oil. But in their spare time they broker illegal ivory.

This rather incidental avocation has been growing for years, and of course will never reach the level of brokering illegal coltan or funneling in laundered millions from Saudia through the Kismayo National Bank.

But it’s all that’s left.

I’m not making light of this. Just sense.