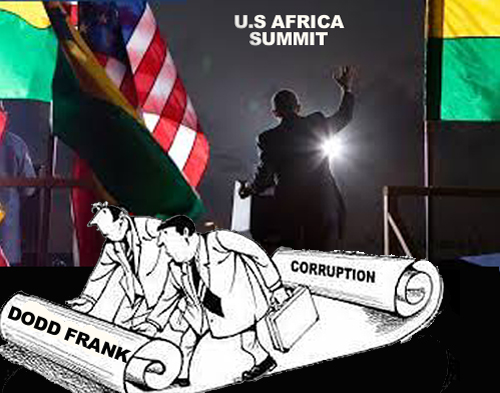 The glitz and fanfare closing the historic U.S./Africa summit today glazed over very serious issues like corruption with lavish promises of aid and economic cooperation.

The political and strategic gains for both the United States and African Heads of State were starkly and almost exclusively economic, and clearly human rights’ activists in particular are leaving the conference terribly disappointed.

The amount of cash pledged by the U.S. and the World Bank was more than double what was expected: over $33 billion. Massive projects for electrification and natural resource development went well beyond the Heads’ expectations.

Of course $33 billion is a drop in the bucket for the U.S. and its western agencies, but it’s a large sum of money in Africa, representing about half Kenya’s annual GDP. It would be like a rich alien power promising Earth $33 trillion in aid.

So the jives are good among the rich and powerful, and the buzz in Washington is all about how Obama successfully challenged China head-on, considered at least until now to have been the dominant new force in Africa.

But there are also a host of not-for-profits and NGOs welcomed by the White House to the summit, often specifically invited, that received little attention. Their concerns are manifold, from the environment to good governance, but unless their topic was trade or foreign investment, they’re leaving empty-handed.

One concern that seemed to pop up again and again in a many different meetings and discussions was Obama’s failure to fully enact Dodd-Frank.

The Dodd–Frank Wall Street Reform and Consumer Protection Act was a signature piece of Obama legislation signed on July 21, 2010. Four years later hardly half of the law has been implemented.

Africans are specifically interested in section 1504, which has not been implemented. This portion of the law requires all mining companies listed on U.S. stock exchanges to publish all their payments to U.S. and foreign governments in the countries where they operate.

Sounds simple enough, right? Well, the very fact that it might be implemented is probably one of the main reasons that the generational war in The Congo is almost over. It would end the decades-long practice of many international companies that obtained their rare earth minerals from Congolese warlords.

The law is clear, whether it really did stop the Congo war or not: Nike, Apple, Motorola (now Google), Intel and dozens of other companies that had been buying minerals like tantalum from war zone black markets could no longer do so.

Moreover, eight of the world’s 10 largest mining companies and 29 of the 32 largest active international oil companies would be covered by the Act as well, were it implemented.

But it hasn’t been, because the Security and Exchange Commission which is entrusted with writing the rules to implement the law has been stymied and sued and from the point of view of many Africans, complicit, with multi-national industry lobbying.

“Anti-corruption activists are losing patience with what they see as pressure by the extractive industries to prevent the emergence of tough new disclosure requirements,” writes Africa policy expert Jim Lobe.

At one of dozens of activist forums at the summit, one of Africa’s most successful businessmen, Mo Ibrahim, challenged “The United States, which has been a leading light on corruption [for] now dragging its feet. Do you have a backbone, or what?”

I know that realistically economic issues govern the world, and economic prosperity often heralds peace and happiness. But let’s move this beyond game of monopoly between China and the U.S. and realize as well that there’s wealth in morality.