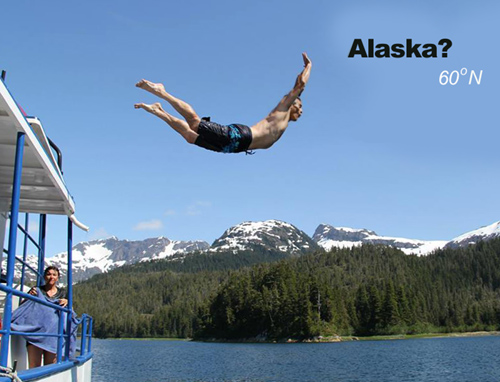 I’m on my way to Africa, to 0 degrees latitude. Right now in Arusha it’s 15C (59F). When Bill Zanetti went swimming yesterday in Prince William Sound, at 60N, the water temperature of the ocean was 68F! (20C)

I flew over the north pole from Anchorage nonstop to Frankfurt, and fortunately for much of the journey there were no clouds. Only at our topmost point on earth was the ice uniform. Everywhere else it was cracked, with huge rivers and passages, and this is only the beginning of summer.

We saw yellow-bellied flycatchers in Fairbanks; they belong much further south. We saw more humpback whales than most week cruises in Prince William Sound see in July when it’s more normal for them to congregate here.

We visited the northern-most oyster hatchery on earth, a single man’s operation in the Sound. Oyster Dave normally gets his oyster “seeds” (young oysters) from places like Vancouver, but he now can see the day when oysters will actually breed this far north. All it takes, he said, was a few weeks of 70F water.

Alaskan waters hit that high temperature once before, in 2007. Unprepared for such warmth, oyster farms in Alaska were hit by the deadly Vibrio virus. Two years later, a “red tide” also attributed to warming temperatures closed down the Alaskan oyster industry.

“This was probably the best example to date of how global climate change is changing the importation of infectious diseases,” said Dr. Joe McLaughlin of the Alaska Division of Public Health who published the Vibrio study.

Our two-week absolutely fabulous journey through Alaska was characterized by so many wonderful high points it’s hard to summarize, and then I realized that all these “high points” were attributed to unusually beautiful (read: warm and dry) weather.

Alaska at its best is cool and damp; at its normal wet and cold. Of course there are periods of glorious days of warmth and sunshine, but that’s not normal. At least not until now.

Cold and wet in Africa but warm and dry in Alaska. I can hear Senator Inofe shouting how global warming is a “hoax!” But global warming doesn’t mean that every single unusual event is warmer. It means overall it’s warmer, and for sure if you average out Africa temperatures with Alaska, you’ve got global warming.

But more importantly global warming, or for that matter global cooling, coming as ridiculously fast as it is will be noticed primarily in its extremes. Extremes in everything, including coldness. In sum we’re getting warmer, but moving there so fast creates rebounds from weather events that are just as dangerous as the long-term trend.

And hardly a scientific fact, I was really chilled looking at the North Pole. From my admittedly infinitesimal experience over near 90 degrees latitude, there is no big ice cap, anymore.

It was great for us, day by day. Mt. McKinley was out almost constantly, and our flightseeing around the mountain was unobscured by a single whiff of cloud.

Hiking in Denali was a cinch. You didn’t even need the rubber boots that every lodge and camp in the area insists you bring, because the tundra while soft wasn’t damp.

This is a collection of fragile, extraordinarily beautiful flowers that appear quickly and over the course of the summer, collecting the fragmentary and unique moments of warmth and wet in this stressed ecosystem necessary for them to propagate.

But they’re all here at once! What the hell does this mean?

It’s a stretch on the pun, but it means it’s too warm; at least too warm for the way we used to understand Alaska and Africa.

Birds and plants and fishes and whales will all adapt. Many will disappear and be replaced by others; Alaskan scientists are worried that dandelions will replace many of the beautiful little flowers named above. That doesn’t worry me; that’s nature, the beauty of natural selection.

But while birds and animals and fishes and plants exchange components and reorder themselves for a new, warming world, in order to survive … what are we doing to survive?

It’s only a hoax, says Senator Inofe. There’s no need to do anything.