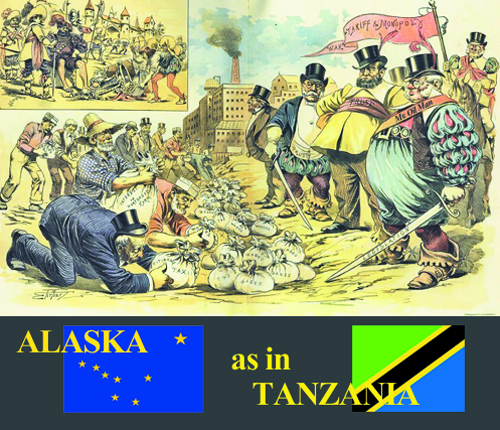 Last week I chastised Tanzania as a singular polity that squanders its natural resource wealth. I was wrong. So is Alaska.

I’m preparing for my once annual Alaskan trip and as always I’m in Fairbanks a few days before my clients arrive. I had no idea how similar it is to Tanzania.

Election mania is everywhere. Billboards, signs, TV ads – I couldn’t understand why compared to my own very political state of Illinois, Alaska seemed so hyped up.

Turns out it isn’t the November election of candidates that’s garnered so much interest. It’s the four referendums forced onto the ballot by grass roots signature campaigns.

Three will be on the general November ballot: legalizing marijuana, raising the minimum wage and banning further mining in certain salmon spawning grounds.

The Big One, though, comes up August 19 and is what made me realize Tanzania doth not stand alone. Ballot Initiative One repeals Senate Bill 21 which has halved the state’s oil tax revenues.

In 2012 the Republican governor Sean Parnell called his predecessor, also Republican Sarah Palin, wrong for reenacting a state tax plan for oil that had been in place for decades. So Parnell, the banks and oil companies, then pushed through a bill in 2013 that reduced the maximum tax (linked to the wholesale oil price) from 75% to 35%.

Now from what we’ve been able to learn mostly from leaks of Tanzania’s strictly secret mining agreements, Tanzania is happy with 3 or 4% and opposition activists in Tanzania are screaming for 15%. So in fairness, the pie graphs aren’t very similar. But here’s the thing:

Alaska has a much, much smaller population and is dependent almost exclusively on mining for state income. And even more important than this, the previous tax plan has worked since the 1970s. Alaskan government, Alaskans who earned on average $1700/month in dividends, and even the big oil companies have been pleased as puddin’ pie.

But as seems to happen everywhere today, Republicans who are so out of touch with their electorate and in the pockets of big money (like oil companies), will do anything to stay in power. They seem to know getting elected on policy isn’t going to work.

Alaska, which has been a poster state for balanced budgets, went $2 billion in the red for the first time, this year. It didn’t even go in the red during the Great Recession!

It went in the red because the Republicans gave half their revenue back to the oil companies!

Here’s the public Republican argument: oil revenues are declining because competition is growing from places like the Dakotas which have virtually no or very little tax on the oil companies.

Here’s the truth: oil revenues have been declining since 1988 as the major oil fields that were first developed in the 1970s mature and dry up. New oil fields are being developed just as fast if not faster in Alaska as in the Dakotas.

Alaska remains the most inexpensive place in the world to develop oil fields.

In both cases, I call this stealing. That makes the two polities much more similar than different.