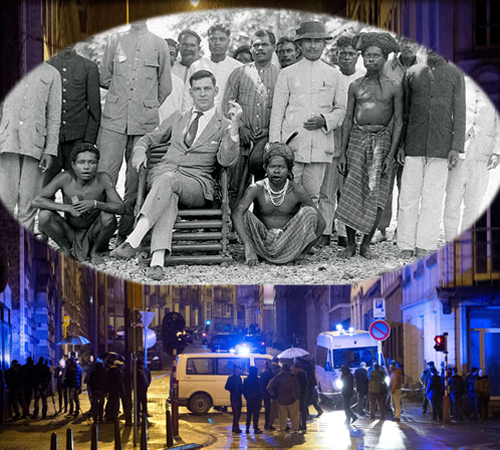 There’s no shortage of empathy in Africa for the victims, nor any support for the barbarism of ISIS. But there’s an understanding of the situation that most Americans lack.

Many more thousands of Africans in Nigeria, Somalia, Mali, Kenya and elsewhere have been barbarously slaughtered by radical Islamists than westerners, with little note in the west. Sidelined by this western arrogance understandable anger animates much African analysis.

In an open letter to Facebook’s Mark Zuckerberg published in one of Nigeria’s main newspapers, writer Jafaar Jafaar politely criticizes the French flags and other gifs that Facebook spread over its platform, worldwide:

“While my heart goes to the French over [the] terrorist attacks… I couldn’t but lash at the folly of Facebook for failure to identify with Nigeria when an estimated 15,000 Nigerians were killed by terrorists in round-the-clock attacks in eight years.

“Sir, I don’t want to believe your bias was informed by the assumed superiority of the races you often identify with.”

“Well the simple answer is that to some in the world some lives are more important than others. Western media … has made this abundantly clear,” writes Christopher Charamba for Zimbabwe’s Herald.

I’d say the majority of analysis also lays the blame for the Paris attacks fundamentally on the west itself, for having disrupted Mideast societies for so many years:

The respected author, Charles Onyango-Obbo, recounts almost a thousand years of history in his analysis for Kenya’s Daily Nation this morning.

He reminds readers of the constant exploitation of the world by the powers that be, including the horrible epoch of slavery. Pointing out that the Mideast “is not much bigger than DR Congo and Algeria… mostly desert with relatively few people,” the wars there are all about oil and Israel.

He concludes so appropriately as so many of us have for so many times, that the foolish notion of “wiping out” ISIS or whatever other horrible group might be contesting the region will only ready it for something worse.

This dynamic – fighting to eliminating the bad guys in the Middle East – has been going on for many centuries, but has never ended well for any of the temporary victors. Each time a bad group is eliminated, a worse group arises.

Some in Africa are not as polite as Jafaar, Charamba or Obbo.

A South African Muslim cleric, Farid Esack, told a South African news agency yesterday, “I am sickened … that whenever [western] chickens come home to roost then I must feign horror.

“Stop supporting and funding terror outfits, get out of other people’s lands and continents… abandon your cultural imperialism, destroy your arms industry that provides the weapons that kill hundreds of thousands of others every year.

“The logic is quite simple: When you eat, it’s stupid to expect that no shit will ever come out from your body. Yes, I feel sorry for the victims… But, bloody hell, own it; it’s yours!” he said.

Just as in Nigeria much more attention is paid to Boko Haram attacks in Nigeria than ISIS attacks in Paris, it’s understandable on the one hand that western media – which is predominantly the world media – will focus more on attacks to westerners than Africans.

But the margin of that difference in attention is hard to justify, given the simple numbers of people suffering at the hand of radicals in Africa versus in the west. And Obbo’s astute analysis that this whole mess is a western derivative makes it even less explicable.

We are arrogant. We are forgetful of even recent history. We are small, reactionary thinkers as demonstrated by the lunacy surrounding our fear of accepting Syrian refugees. We should listen to some Africans, rather than just ourselves.