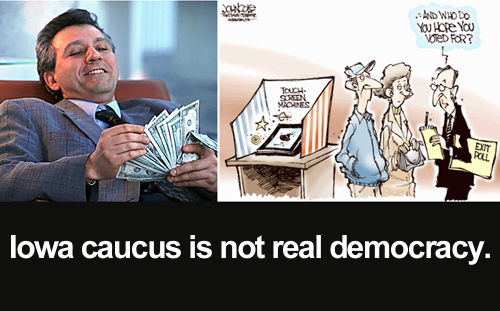 Many Africans view the Iowa caucus as not very democratic, governed less by voters expressing preferences than by the media, polls and money.

Nairobi’s heavily listened to radio station, Capital FM, called today’s elections in Iowa “peculiar.” Finding it amusing that “voters .. gather late on Tuesday in church basements, school auditoriums and even in some private homes” the radio station said it was one of the “quirkiest but most important electoral events” for the United States.

I think that most of the educated world has developed a notion of democracy that is much more realistic than we have in the U.S. Pure democracy, which might today be akin to California’s referendums or even simple issue questions that participants endorse or condemn by a simple internet vote, is itself confused by how that “simple issue question” is formulated to begin with.

Democracy is a messy process, however you look at it. Voting fraud, which is not an issue in America, is a grave issue throughout much of Africa. But undemocratic influencing of voting has reached its apex in America, today.

Much of Africa receives its news about America from world sources, since local resources don’t allow foreign correspondents. BBC-Africa Service, News24 (from France) and Radio Netherlands all have services directed at Africa and often produced in Africa by Africans.

The BBC-Africa service has provided the most coverage of the American election. In a video interview with a university professor in Iowa, BBC-Africa claimed that issues were hardly important in today’s election in Iowa, but rather how much attention the winner would get, how it would then effect him/her in the polls and most of all, how much money will then flow into his campaign coffers.

Money for campaigns overwhelms most Africans. Consider that the amount of money this election will likely receive from PACS and superPACS ($2 billion) exceeds the entire national budgets of many African countries. And that could be doubled by individual small contributions.

You can’t help but agree that money is one of America’s most important democratic tools. I don’t think Africans think this necessarily wrong, particularly if it’s fairly managed (which it may not be, now, after recent Supreme Court cases), but what sticks out like a sore thumb is how brazen Americans are that their system is more democratic than others.

“I don’t think Europe is working in Europe. I don’t want Europe here,” Mitt Romney was quoted in fin24, a conservative South African business journal which was nevertheless mocking the idea that Europe isn’t working.

Of course Europe is working for Europeans, and frankly I believe the parliamentary system delivers democratic choices cleaner and quicker than ours.

America is descending from supreme everything, and that’s not all bad. But hopefully we can learn from those in the world ascending, like many in Africa. Becoming jingoistic as suggested by the Romney quote doesn’t aid our transition.