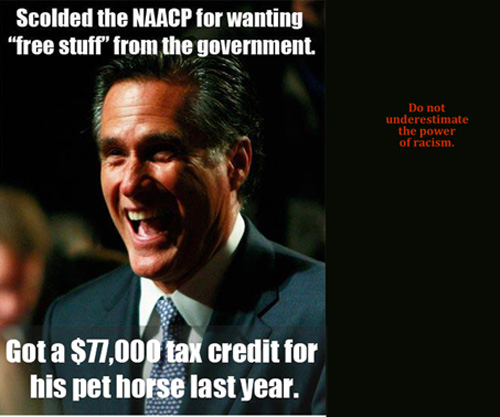 No surprise that Africans don’t like Mitt Romney. But what is surprising is that they take Obama’s reelection as a given. Romney is not considered a serious candidate.

Or possibly Obama is considered invincible, and those of us at home know this is really not the case. But why do Africans think so?

The birther issue reborn a few days ago, Romney’s callous remarks about his ancestors owning slaves as reason he understands black people, and last night’s clumsy if crude endorsement by Clint Eastwood are all the types of news stories that quickly make it into the African press.

And frankly, those Romney snippets don’t portray a serious candidacy but one so far on the fringes it can appeal to only a very small group of people.

That’s, of course, where Africans are wrong, as is much of the world. Americans are credited with superior everything – superior economy, superior entertainment and superior government. But that, too, is wrong. And Romney’s appeal – however limited foreigners might think it – clearly appeals to a large portion of America.

In my opinion, it isn’t an America foreigners can’t know, it’s one they choose not to know.

There’s so much angst in the world right now, the notion that there is not a shining beacon on the hill is just something an African, for instance, would rather not believe.

The South African press in particular has been covering the election campaign quite extensively. The issue of most interest this week got little attention in the American media.

A reporter for Yahoo News, David Chalian, was caught unawares on a live webcast in conjunction with ABC News at the Republican Convention. As Hurricane Isaac approached New Orleans he remarked to a guest at his side, “Feel free to say, ‘They’re not concerned at all. They are happy to have a party with black people drowning.'”

Chalian was immediately fired by Yahoo, and that has stirred widespread disbelief that the American system is so unforgiving of impoliteness, particularly when the impoliteness happens to be true.

In a comment left after a South African report of the incident, ‘Pointman’ summed up all the other many comments that today flood South African newspapers about the story:

“The journo was most probably right. Remember the Republican party’s response to Katrina and the flooding in New Orleans- all those Black people (and whites too) stranded after the inundation and no help anywhere for days.”

“I agree,” then commented ‘Cocolucho.’ “The republicans only seem to care about bible wielding whites and no one else, which is funny cos they are such hypocrites.”

“Most White Americans including those that fired him,” added ‘Tsatsatsa’ “share the very same sentiments.”

“Americans are racist,” declared ‘DJ-Winner.’ “They go as far as calling that country a safety heaven. Safety heaven, my foot.”

‘MommaC’ said, “Shouldn’t have been fired for telling the truth.”

The comments are flooding the South African press, today. They are essentially dismissing the seriousness of people who really still question Obama’s nationality, who take Romney’s remarks about women and ancestors and abortion with hardly a grain of salt, and who would fire a reporter for what he thought was an offline remark which also happened to be true.

They are dismissing the Romney candidacy as no real threat.

Don’t be so sure.