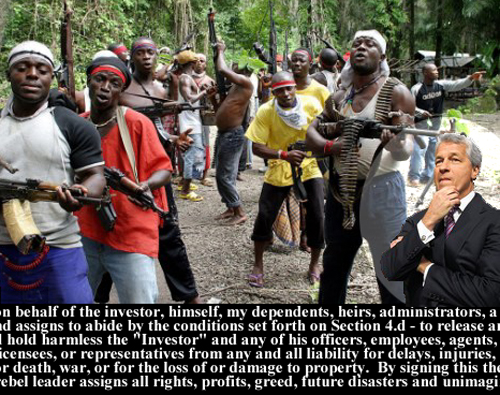 OK, here’s the deal. Invest a thousand dollars to extract minerals from Africa, today, and your return will be $150,000 … after the rebels win the civil war.

Kilimanjaro Capital is a Belize-based company, with a Canadian website, and European capital listed on some Danish and other northern European exchanges. The CEO, Zulfikar Rashid, was born in Uganda and believes the best way to make money in Africa is to bet on civil wars.

I remember once trying to get into the business center at the Norfolk Hotel in Nairobi, before we were all drowned in wifi, and became a part of a congested line of anxious and poorly dressed white businessmen who were courting the then president of Somalia.

There have been many presidents of Somalia, until the recent spat of stability brought on by the Kenyan invasion last year. This was probably ten years ago.

The poorly dressed white businessmen had contracts coming out of their wazoo, busting briefcases and literally shoving one another to get this mercurial and previously unknown individual to sign his name on a contract for various and many mineral rights.

I’m sure in turn he was paid something on the spot, because I also picked up a few loose Euros at my feet in the line to the photocopier.

I got only a fleeting look at Abdul. He seemed a very thin if frail individual with very large black eyes and a scraggly, narrow black beard. He was dressed in native Somalia, all white robes with a white turban, and was dwarfed by two handlers, or body guards, who looked southern Italian and overfed.

He was a jolly Scotsman. Just flew in from Heathrow when he heard Abdul was going to be in town. He wanted the fishing rights just off the coast from Kismayo that were currently being pirated by French fishermen.

At the time Kismayo was the capital of world pirates. But this jolly dressed, poor white red-faced Scott was beaming. He wouldn’t tell me how much those rights would cost. Nor did he express sufficient confidence from my point of view that he would be able to fish in the sea dominated by professional pirates. But for some reason, it didn’t seem to matter.

Kilimanjaro Capital, though, is the first of such venture renegades that has achieved such respectability. And its still rather small portfolio is quite diversified, including some normal mineral rights claims even in North America.

But its success depends upon rebels, which are mostly today terrorists, taking control of African land rich with minerals but poor with organized society. Like Kivu province in the eastern DRC, or Biafra in Nigeria, or southern Cameroon.

These are all areas which have seen conflict for more than a half century. The mineral rights are critical to funding the rebel movements.

One of the biggest accomplishments of the Obama Administration from my point of view was a provision in the Dodd-Frank Act that made illegal such dealings with American interests.

It’s probably why Kilimanjaro Capital is located in Belize, has a website in Canada, is listed on a Danish exchange and is run by an Ugandan. I don’t think Dodd-Frank extends quite that far.

Betting on misery is, of course, nothing new. The Great Recession was caused by many such components. But more germane to the moment, I think that Director Rashid is doomed to fail, because rebel movements … well, they just aren’t doing too well lately.

Terrorism, yes. But actual regime changes or national secessions … no. And a contract with Osama probably wouldn’t work.

So let’s just marvel at how amoral, greedy and maybe just crazy part of the investment world is. And let’s just hope that there’s more and more Dodd-Frank worldwide to keep these renegades from spreading.

I’ve got a much better lead on a penny stock, anyway.