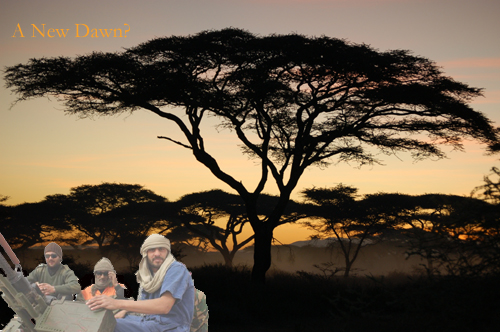 The fighting in much of Africa is settling down into a complicated and unnerving politics. Some see this as a lull before a real storm. I see glimmers of peace.

My rosy outlook depends on Europe. This is because everything in the world is economically linked, and the weakest chain right now is Europe. If six months from now Europe is stable, with or without Greece, I’ll breathe a sigh of relief.

Nigeria, the Ivory Coast, Kenya and the giants of Libya and Egypt all have indigenous organization that will right their bobbing ships if Europe resolves quickly. Even chronic trouble spots like Somali could cool down : My view.

There are other views. Most of the prominent thinkers in Africa would be considered extreme progressives by most Americans. They see their continent as settling down just like I do, but while the developed world heats up. This switch in developmental political polarity is seen as an opportunity for Africa to step out of old world orders like those governed by capitalism.

This view presumes Europe won’t resolve. It presumes that America’s self-destruction isn’t ending just with the Republican Party. It even presumes that China is poised to enter its own period of intense civil disobedience.

“We are in a revolutionary moment and revolutionaries cannot be pessimistic,” writes Horace Campbell in the African journal Pambazuka.

Campbell sees the world situation very similar to the era just before World War II, which followed the emergence of radical if revolutionary ideas in places like Europe and the United States after the poor end of World War I.

Western politics are driven by rich “capitalists … who want the pretext for war against Iran so that a wider conflict could cascade from Iran and the Middle East to Pakistan and wider afield” to beef up the old economic machine.

But unlike the twenties and thirties, western war machines are “degraded by the humiliations in Iraq” and the U.S. military – the world’s “greatest superpower” – is spent. Combined with Europe’s obsession with austerity, all this “old thinking” will be unable to “salvage the outmoded forms of governance.”

The result in Campbell’s view is the “revolutionary moment.” And what I see as a settling down towards possible peace in Africa he sees as the lull before the storm.

Less revolutionary but equally pessimistic in terms of a bright dawn of peace, Alex de Waal believes that the West is too impatient with Africa and time and again quashes its own good attempts at peace and development.

“The dominant interventionist approach to peace and security in Africa by-passes the hard work of creating domestic political consensus and instead imposes models of government favoured by western powers,” Alex de Waal writes in OpenDemocracy.

De Waal lists a number of situations from Darfur to Libya where he contends that African created and led efforts that could have ended conflict were stymied by western powers. He implicitly thanks China and Russia for stopping the west’s knee-jerk reactions towards Syria, even while supporting Syrian revolutionaries.

Because he believes that an incomplete end to these conflicts are short-term only, and that the lasting result of this outside suppression of internal healing will be increased conflict.

Conventional global powers “tended to see Libya as a problematic version of Tunisia” whereas “Africa … feared that Libya would turn out more like Chad–mercenarised tribalism spilling across frontiers” creating armed rebel groups throwing “havoc” all over the region.

Although that remains to be seen, recent reports in neighboring Niger may now confirm de Waal’s fear.

Nevertheless, I think de Waal is too pessimistic and Campbell too revolutionary. I’m no milk-toast liberal, and I agree with much of what these two political philosophers believe. De Waal is right-on regarding the impatience of the west and the intrinsic failings of its (often militaristic) band-Aid approaches to African conflict.

And Campbell’s historic analysis tempered by economic realities I think will lead pretty quickly to a revised world economic order and I’m glad it will.

But unlike both I don’t see a fiery horizon presaging a new dawn. I think most of the conflict is over.

I don’t think we’re going to go to war in Iran, regardless of what impish Israel might do. I think the healthy worker movements in Ohio and Wisconsin as much as in Zukan and London transit and Greek hospitals will strengthen and become strategic forces for change.

And I think the movements in Kenya, Nigeria, Libya and Egypt will turn out pretty good.

I believe all this, because I sense majorities of power growing in Africa as well as here and Europe that consolidate facts, stick with simple truths and release human compassion.