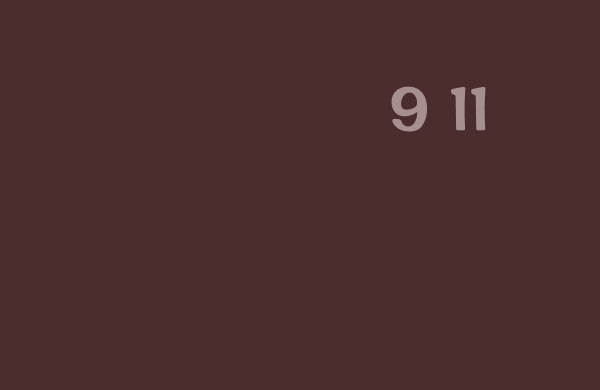 Nine-Eleven is a bookmark for me as I’m sure for many others. Whether it deserves the attention Americans are giving to it is a hot question in Africa, where there are effectively nine-elevens quite often. The surprise hurt, loss and lasting grief from a strangers’ act to individuals and communities occurs at the same or greater scale all over the developing world with a frequency many Americans deny.

But my memories borne of my unique journeys through life is vivid of Nine-Eleven. Perhaps my story can add some value of meaning to the jumble of perspectives this weekend commands.

I’m on the phone in my second floor office in a shady suburb of Chicago with my daughter who with her classmate was having coffee on their apartment rooftop as they both watched the planes crash into the Tower.

Kathleen and I are talking her down from her near psychosis because EWT had one of the oldest 800-telephone numbers in the country. More than 95% of the phone lines weren’t working. Every word I said raced through a million filters in my mind before I used that precious technology. It was around noon, September 11, 2001.

After Liz got control she asked if we could patch many of her friends and classmates to their families across the country, because they were unable to get through themselves. So for the rest of the afternoon and into the evening we patched Debrah with folks in San Diego, Leslie with an aunt in CHicago, Maggie with grandparents in Tulsa.

Early that morning I’d gone to the office as usual, first one there. We were using email but many in Africa didn’t have it and so I checked the old telex feed knowing I still had an hour or so to respond to anything urgent before African offices closed.

Nothing urgent, I went downstairs to make myself some tea.

Employees didn’t come until nine. Kathleen would be home even later getting our son ready for school. I went back upstairs and turned on the radio to get WBEZ so that I wouldn’t miss the 7 o’clock news. The 1998 bombings of the American embassies in Kenya and Tanzania had seriously effected our business. The upcoming holiday season looked like the first real recovery from a more than two-year slump.

Every day that I sipped my tea alone, my urgent chores completed and the office empty, I’d think of the day the embassy was bombed. I was in my special room at the Norfolk Hotel. There was blast around 10 a.m. and everyone in the hotel ran into the garden. It was a lovely, warm sunny day. The hotel was about a mile as the crow flies from the embassy and it took only about 6 or 7 minutes before the sky was filled with smoke and debris began to drop at our feet: broken glasses, pieces of clothing.

Nairobi burned that day. My most trusted driver, James Kilongo, took me with him through the streets that night as we skirted one fire after another. The bombers didn’t cause the fires. Nairobi residents were burning everything Islamic: mosques, businesses, cafes…

I was in my upstairs office when I could hear the first chatter downstairs as employees were beginning the day. This was always a time of ennui. I much preferred searching for lions than numbers and files.

So the day wandered on until Nancy buzzed me from below.

“Isn’t Elizabeth in New York?” her lovely, elderly somewhat squeaky voice pleaded with more concern than interest. Nancy was never able to put an exclamation point after anything she said, but my body stiffened.

I raced home to watch the TV. Home was a short, beautifully wooded bike path from the office. Kathleen was already watching. Then the office called again. Liz had gotten through on the 800-number. We raced back.

Liz is one of the strongest individuals I’ve ever known, and perhaps some of that strength came from dealing with Nine-Eleven. Later she’d venture into worn-torn Mozambique against my advice, a “vacation” from her studies at the University of Cape Town. Even later the two of us barely escaped kidnapping by the Interahamwe as we searched for mountain gorillas on the Uganda/Rwanda border. She hates spiders, but when she was guiding one of our safaris and was pushing a woman with MS in wheelchair into her tent, she quickly opened the tent door umbrella to cover the cobra that was coiled to attack them in the middle of the floor.

If Liz got strength from Nine-Eleven, I was weakened. I’m still enervated when remembering. I was only 53 then, but I’d already seen so much fighting and destruction that I knew as my life continued it would only get worse.

From babies I held who died in my arms of malaria, to being kidnapped in Nigeria, to being jailed in Conakry, to escaping with eight clients from the start of the Rwandan genocide, to listening to the Congolese militia beat my guide nearly to death, to the heads I saw mounted on the flagpoles of the Hilton in Addis when I opened my curtains, to so many of my employees getting AIDS and TB and malaria…

I knew at Nine-Eleven that the world was not on a trajectory to peace and beauty.