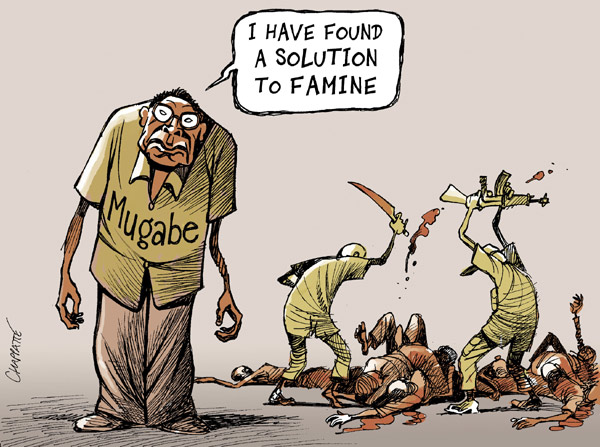 Zimbabwe is on the brink of a new and violent crisis. Stay clear of the Zimbabwean side of Victoria Falls.

The ailing dictator, Robert Mugabe, is in Singapore for medical treatment. Yesterday he issued an unexpected and terrifying statement that all the remaining white farmers “had to go” by August.

There is an element of unusual desperation in the statement which I believe could lead to a series of very violent events.

These may not just involve white farmers. It could indeed be that Mugabe is very sick and is trying to hasten his mad policies before the end.

When he dies, or because it’s known he’s dying, a fight among the ruling elite to succeed him could be violent.

There are somewhere between 4-5000 white farmers who have survived Mugabe’s wrath for the last 14 years since the original 50,000 white farmers were told to leave. They have compromised their land ownership and production capabilities time and again and have lived terrified lives.

Almost weekly there is a brutal killing of white farmers.

It may seem amazing that any white farmers remain at all but it’s important to understand that many of these “hangers-on” as Zimbabwe politicians are apt to call them, were either extremely wealthy to begin with, capable of buying off ministers and police; or had absolutely no connections left anywhere else in the world to go to.

Now, every single one of them must leave.

“There are white farmers who are still on the land and have the protection of some cabinet ministers and politicians as well as traditional leaders,” Mugabe said in his statement from Singapore.

“That should never happen and we will deal with ministers but as for our chiefs we do not want to harass you.

“Chief Charumbira (Fortune and president of chief’s council), you need to help us on this one because we respect you and your members. We do not want trouble.”

To Mugabe the fiscal implication of his dictum – which will finally and totally destroy the tidbits that remain of the agricultural sector – doesn’t matter a hoot. His bankrupt nation survives on aid from South Africa and China. His agriculture minister, Joseph Made, is currently in Iran seeking more assistance.

Poverty, disease and life expectancy are only some of the metrics together with the economy that have exceeded crisis levels in the last decade.

During and just before the Arab Spring there were movements of reform and activism that were surprisingly successful. Large demonstrations which suffered countless killings and injuries forced the government into a new constitution which created the first ever opposition party.

But that party has been cajoled and coopted and is today totally powerless.

Historically Zimbabwe’s wealth was based on tobacco farming and mining, both controlled almost exclusively by the descendants of white settlers and colonists, the first of whom arrived in the 1890s.

The enmity between whites and blacks and among ruling tribes has been profound throughout all of Zimbabwe and Rhodesia’s existence.

By the mid 20th Century whites controlled virtually every aspect of the nation’s economy and wealth, yet they represented less than 6% of the overall population.

Never before or since in Africa has such a small percentage of a society’s ethnic population ruled so exclusively.

Britain hastened independence on its African colonies in the 1960s and tried to engineer a fair political plan that was scheduled to take effect in 1962. Any notion of fairness, of course, would have completely marginalized white control.

So a group of white politicians led by Ian Smith staged a coup and declared independence, and for 18 years whites continued to rule the country.

The civil war which developed was tedious and long, because the whites were so powerful. Finally in 1980 the U.K. and the U.S. brokered an end to the war that resulted in Mugabe coming to power.

He’s never left, and he’s never forgotten. He’s hell bent on retribution that stretches back to precolonial times when the maverick Cecil Rhodes tricked tribal leaders into giving them their territories in 1888.

But Mugabe has proved impotent in replacing the white-dominated economy with anything but aid. Strong sanctions from the west limit Zimbabwe’s growth to be sure, but numbers show that any investment is squandered.

The next chapter in Zimbabwe’s history is very near. And I’m afraid is likely to be very bloody.