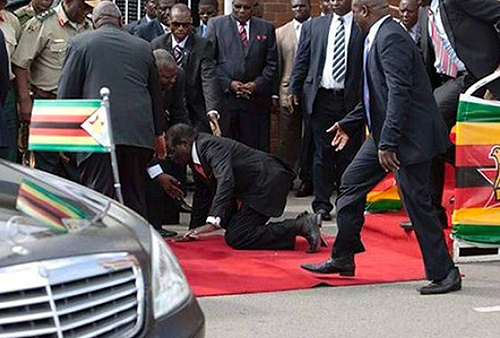 Robert Mugabe is like the feral cat that keeps showing up at the bird feeder.

Whenever it acts the back yard trembles. It always catches something, and you can hear the bones crush as it eats the poor thing whole.

Robert Mugabe has been Zimbabwe’s leader for 35 years. For at least 25 of those he’s been an abject dictator. His main prey: white people, but that’s hardly all that fills his larder.

He’s eaten up virtually every living thing that has opposed him. In this power obsession he’s neglected one of the most beautiful and potentially rich countries on the continent.

Last week for the first time I can determine Zimbabwe media universally criticized his “State of the Union” address. He mumbled, fumbled, fell on the way to the podium, then misread his prepared remarks.

“While his handlers have insisted the Zanu PF leader is as fit as a fiddle, Mugabe’s body posture show a man very much being dragged to events with his body in evident protest as he struggles to walk.

“The veteran leader’s speeches are now slurred and he uncharacteristically says very little outside the prepared texts.”

Many of us have predicted his demise for years using events like this, or times that he’s shown up at the only modern hospital in the world that will take him (Singapore). A few weeks later he’s smiling at another opponent being cut down.

So summer is ending and another year passes with Robert Mugabe as leader of this beleaguered place. Another round of feisty politicians, hopeful politicians, progressive politicians have been swept out of power leaving little to hope for.

(Where do all these volunteer victims come from?)

The result is a politic totally unknown, a power vacuum or free-for-all looming in the wings.

One day this despicable old man will die. The political landscape he has fashioned is scorched, devoid of possibility. The land he has pillaged for four decades is tired and bleached of its nutrients.

I have been saying for years that little will change when the old man goes. It will take years to reignite the spirit of Zimbabwe in the people who remain there.

If any spirit at all is left.