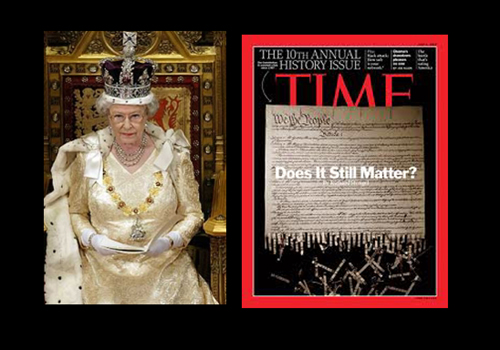 Yesterday I listened painfully to a brilliant African jurist try so hard not to be condescending to a rabid American academic who characterized himself as a “strict constitutionalist.” Some Americans are so stuck in the past. We just can’t see the world whipping past us leaving us in history’s dusts.

So what does one do when in an unusual situation you’re unexpectedly driving across the country on a workday? Listen to NPR’s Talk of the Nation, and the program yesterday afternoon was fabulous: “Should the U.S. Constitution Be An International Model?”

According to the host, Neil Cohen, the program evolved from the tremendous criticism from the right of Supreme Court Justice Ginsburg’s Cairo interview recently where she dared to suggest Egyptians might want to consider other alternatives to the U.S. Constitution when writing their own new one. (After the first two minutes in Arabic, the interview changes to English, stick with it.)

As Slate.Com’s David Weigel posted, the interview “disturbed the balance of the universe.” (The onslaught of rightest invective was so intense there are concerns Congress may try to impeach Ginsburg.)

Headling yesterday’s NPR program was Cape Town professor, Christina Murray. Murray was instrumental in designing the South African and Kenyan constitutions. She was among an exclusive group of global “experts” hired by both countries to assist each in creating a modern form of government.

I would have loved to have listened to Murray and those of similar learned dispositions (like Yale prof Akhil Reed Amar who was also on) talk forever about what I’ve come to realize are two of the world’s newest and now best constitutions. Then perhaps a week later we could start discussing the process of how experts like them were chosen, what motivated the revolutionaries in each country, etc.

But that’s not America, today. Media like NPR feel (under the heavy boot of Congressional funding) a national responsibility to impede intellectual development by giving equal air time to the ignorant. The result is always … nothing but further honing of irreconcilable first principles. Tiring and trite.

The vast majority of intellects studying government systems, today, understand that different cultures emerging in a new world where the ability to protect unique heritages and folkways is at last secure, will have different needs. Like Kenya and South Africa.

The vast majority of intellects studying politics, today, recognize that just as we moved from the diode to the transistor to the computer chip in a mere quarter century, there’s absolutely nothing wrong with altering a bit rules of governance first thought up in 1797.

Yet NPR’s foil to reality on the show, Roger Pilon of the ultra rightest CATO Institute, hogged air time to say the same thing again and again: Raw American 18th century democracy is primae facie the best form of self-governance because the only necessary social objective is to have as little government as possible.

What does a professor say in response to such immature, tautological hogwash? It causes pauses, and that wastes more time. And it transformed Prof Amar into someone who sounded like he was explaining to a four-year old why it was OK that the robin gobbled up the worm.

We’ve got to move on, folks. Murray and Amar and virtually all but one of the callers knew this. The 30+ rights enshrined in the Kenyan constitution offended Pilon who explained he was pretty offended by several of our own Bill of Rights, because “we really don’t need them” arguing that “freedom” means we have “infinite rights” anyway.

I need a plaster. But please, click on the link above and listen to the show. You can turn down the volume when old man Pilon talks.

So kudus to NPR for bringing on Murray, who I hope some day will be nominated for a Nobel Prize. She’s still young and vibrant, and her body of work is exceptional. The constitutions of Kenya and South Africa will be the models for future governments well through this century.

And if we can just get beyond the sludge of our own intransigent ignorance, perhaps even for us.